Beers and the man with the van

As I waited for Deidter Stadnyk to meet me at the Morty’s patio for a promised beer, I had no idea what type of guy I was about to encounter. What I heard about him seemed like some inflated, hipster folklore.

Stadnyk is somewhere in his mid-twenties. He graduated from Ryerson University, was a soldier in the Canadian army, has a good job with steady income, runs a ‘zombie survival camp’ and sleeps in a van — by choice.

When a friend of mine, who was a co-worker of Stadnyk during the summer, told me these bullet points, I knew there was a unique story waiting to be told.

And I was willing to pay the tab to hear it.

Eventually I was greeted by young blue eyes and a warm smile beneath a horseshoe mustache. As the two of us sat down and split a pitcher of Rickard’s Red, we talked about the joys of living a minimal life, separated from the overloaded excess of societal expectations.

“It seems like there’s a lot of stuff that people feel like they need, when they really don’t,” said Stadnyk.

“They feel like they need big common rooms and big TV’s and wide space. And for what? So they can come back at the end of the day, lounge for a couple hours, go to sleep and then leave the next morning.”

Stadnyk went on to explain the freedom of being able to get up and go whenever he desires, never needing to pack a bag.

His few belongings are always ready for adventure. 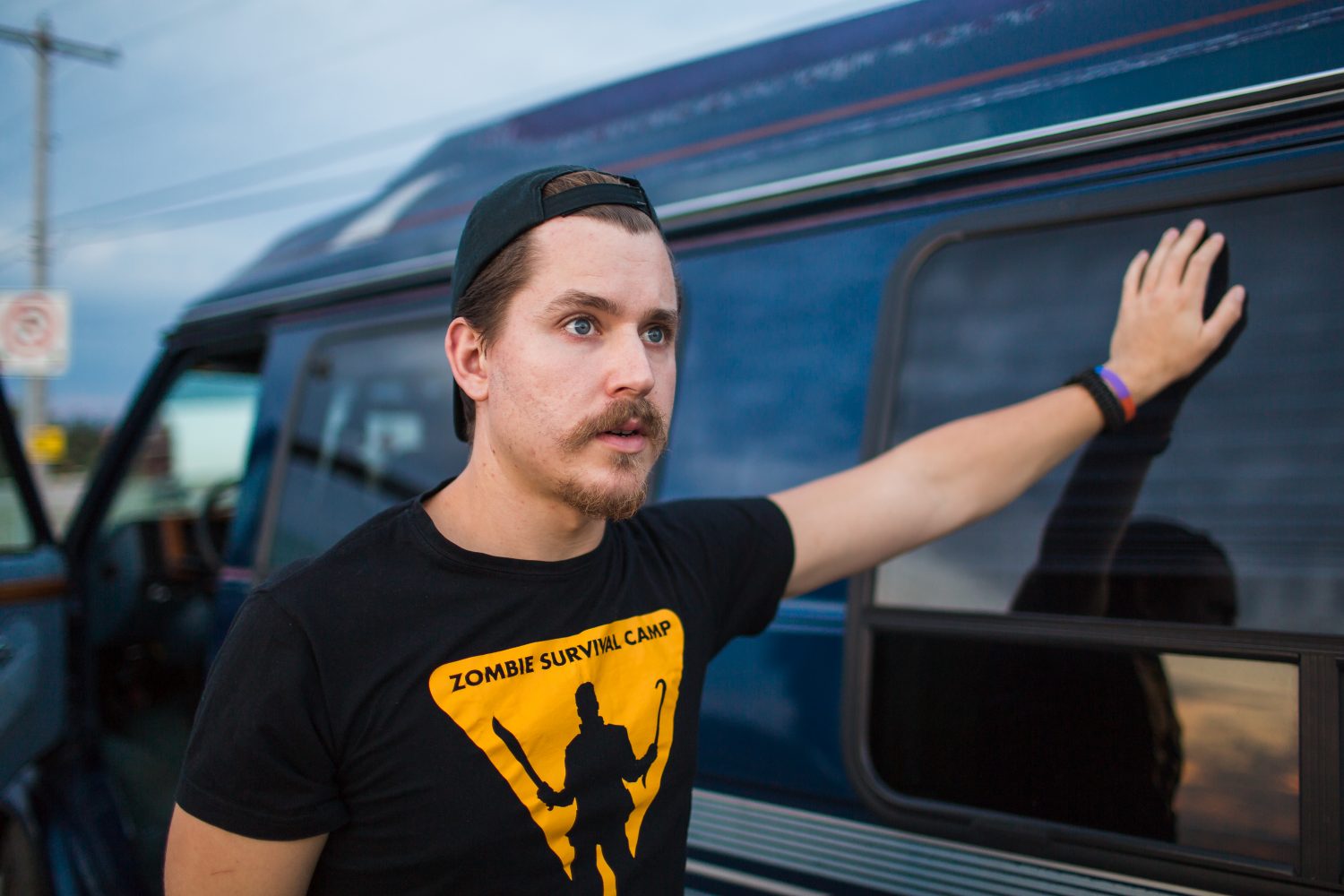 “Living in a van is associated with poverty, a lot,” Stadnyk said, and he’s right. I don’t know what percentage of van-livers do so by choice and vice versa, but I have a feeling that for every enlightenment-seeking Vandura-sleeping-millennial, there are many more who just want to be able to afford a roof over their head. In other words, not everyone is able to conform to the societal expectations of luxury, and in many cases, minimal possessions and inexpensive shelter options aren’t a choice.

Also, the fact that Stadnyk is a white, able-bodied male definitely makes his decision safer than it would be for a woman, person of colour or any targeted minority of society.

But that doesn’t mean we should write Stadnyk off. His point is not that we should give all our shit away and move into a van. His point is actually a simple one, which might sound cliché if he weren’t so radically committed to it: loosen your expectations about what your life is going to turn out like, and think critically about social norms.

“We’re in charge of luxury accommodations. It’s my job that the student feels comfortable and that all their needs are taken care of. That they live in a nice place.”

For Stadnyk, living with what he has is seen as a fortune on its own.

“They think you live in a van because you can’t afford a place. In my case, I’m gainfully employed. I guess I like nature so much that I want to be around it more. With the van, I can just go to the edge of the forest and camp out, which I like. Especially for my younger years. I don’t want to miss out on all the nature.” 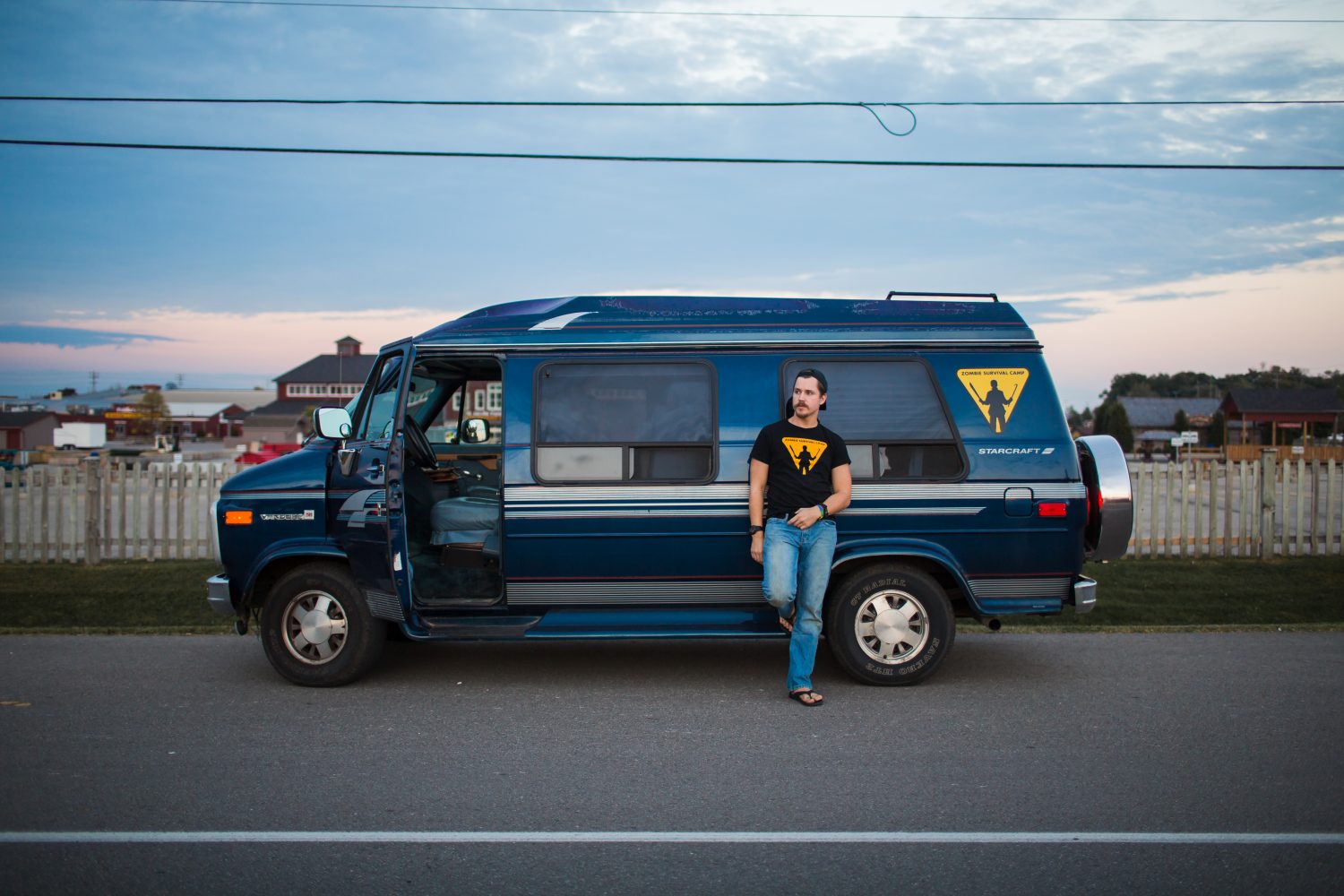 At nights, Stadnyk commonly parks at the Walmart parking lot to highjack their Wi-Fi.

His daily routine typically entails waking up before work, showering at Good Life Fitness, maybe getting a workout in and then tending different properties throughout Waterloo. Afterwards, he tries to spend time with friends, or go on a hike and immerse himself in wildlife.

But he didn’t strike me as someone who strictly follows a precise routine.

“We basically teach people how to survive a zombie apocalypse. It’s like a survival course but we put a fun zombie twist. We do birthday parties, bachelor events and basically go all over.”

The camp first opened in 2013, and has gained much popularity since.

In 2015, Vice Canada did a feature on them, for being Ontario’s only zombie survival camp. The survival courses with a fictional twist covers hand-on-hand combat, weapon skills and basic self defense, with a cast of zombie actors covered in theatrical makeup and fake blood to simulate a real apocalypse experience.

Immediately out of high school, Stadnyk enrolled in the Canadian army. After two years, he decided to pursue his passion for videography through studying film at Ryerson. After doing some maintenance work for his landlord in Toronto, he eventually landed a job with Sage Condos in Waterloo. 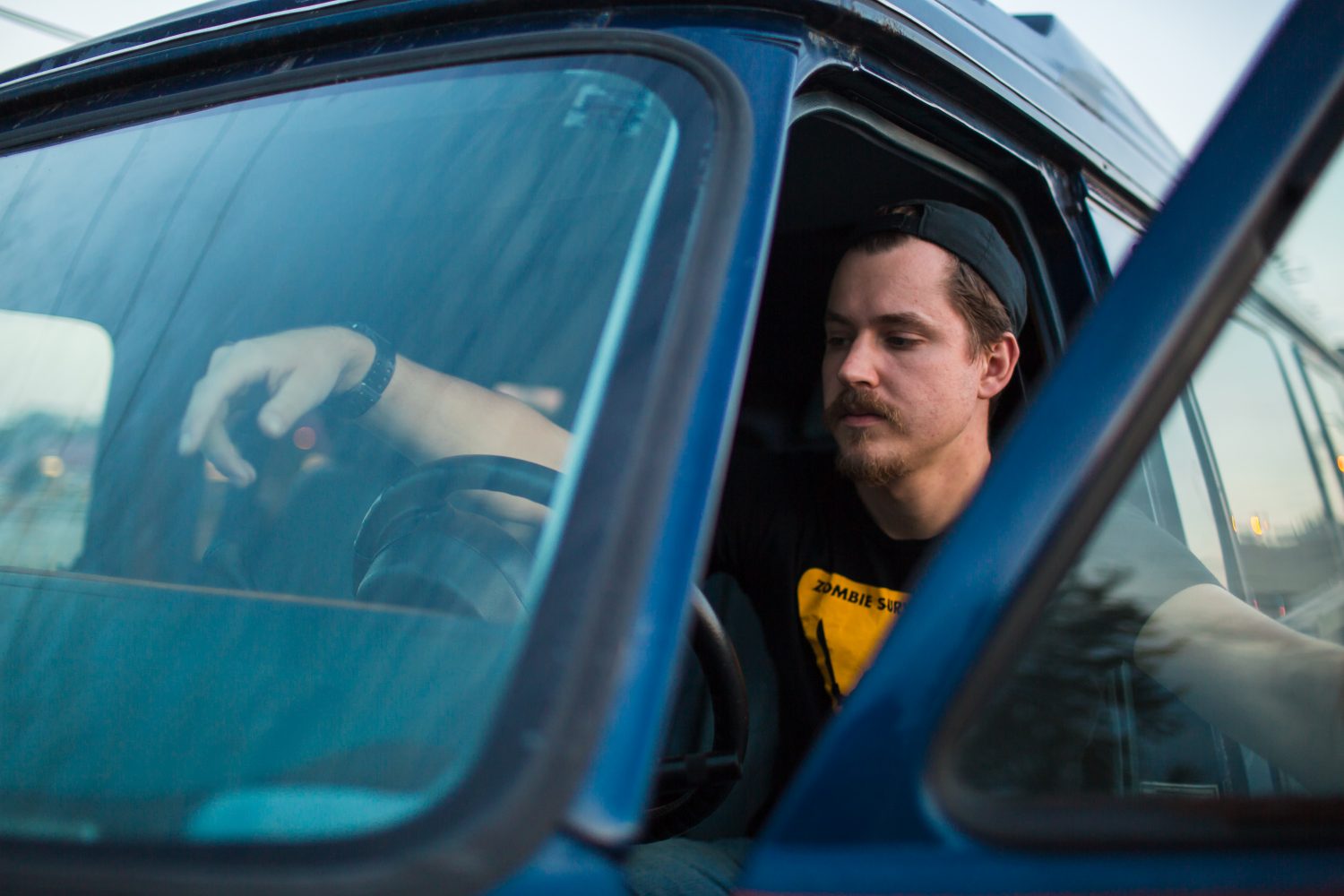 After our beers were polished off, Stadnyk took me to his navy-blue, 1995 GMC Vandura parked outside.

His space was organized with drying socks on the window, hiking boots on the dashboard, books on the floor, a bed in the back and hangers with all his clothing.

He unloaded compartments with entertainment, showing items like board games and zombie graphic novels. In the glove compartment there was a collection of classic rock tapes, including an album by The Doors. He handed me another beer.

I asked him if he ever gets sentimental with his belongings.

“I do with a few things, but not much. I guess I’ve learned to appreciate less. Less is definitely more.”

“Since living in the van, I’ve really discovered that everywhere could be your home,” he continued.

“Everywhere I go I feel more comfortable because I know that everything I’ll ever need I have with me at all times. It makes me much more social and outgoing. I’m able to hang out with friends way more, make new friends way more, meet new people more often because I’m constantly being pushed to go places. It’s not like I just park the van and sit here all by myself all the time. Because it’s not such a luxurious living situation, it motivates you to go and explore more places instead of just sitting still and being happy where you are.” 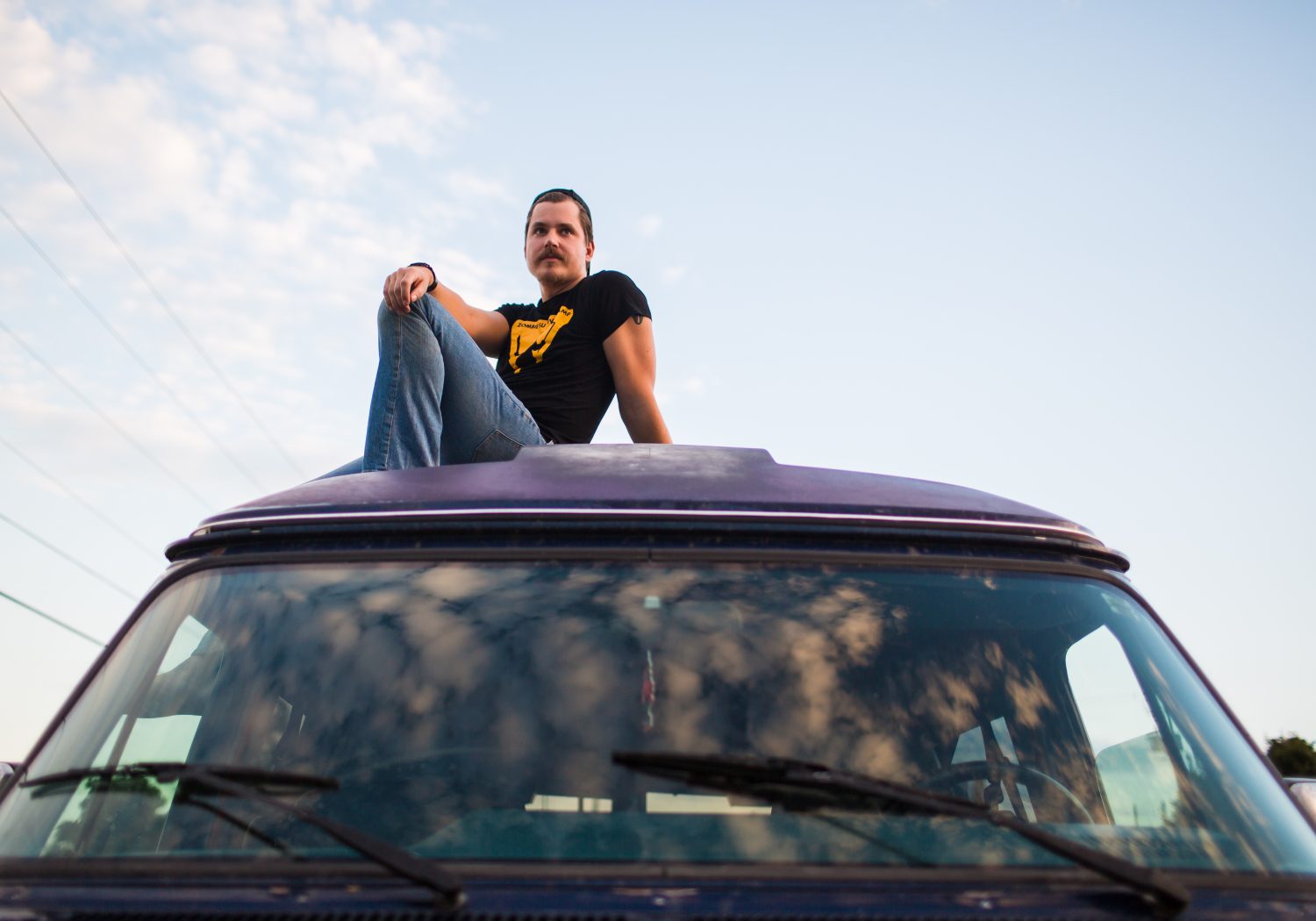 I asked him if this is where he saw himself growing up, if he ever planned this lifestyle.

“When I was in high school I was dead set on being a filmmaker and that’s all I did in high school. I didn’t go to parties, I just spent all my spare time making movies. I was also dead set on joining the army. I wanted to help fight a war. I signed up with the infantry for three years. And that was my thing. I was going to go to Afghanistan and then come back to film school, make war movies just like Oliver Stone — I had it all mapped out,” he said.

“After three years a lot didn’t happen. I didn’t go to Afghanistan. They didn’t send me. There were no more tours. I went back to film school. I became the wheels and grease of a lot of movies. I drove people around, I did sound, I did what had to be done to make good products overall. But after four years of university and three years in the army, it was all said and done. I hadn’t done anything that I had expected to do at this point. That’s when I gave up on having an idea of what you think your life should be like.”

Stadnyk went on to explain that loosening expectations allows a more open-minded perspective to emerge.

“I kind of figured out towards the end of university that you get more out of life if you’re just kind of fluid, and let life’s currents take you where it wants to take you. Don’t always try to swim up-water. If you just let it go then life can take you to some pretty cool places, places you never would’ve even dreamed of that are better than what could’ve been planned.”

He explained that he never could have imagined that he would open the zombie survival camp. He said the dream developed as time progressed, as his plans didn’t turn out to be what he thought they’d be.

With the liberty of his van, Stadnyk has found his home in places nobody would ever expect. His sense of belonging has spread as far as the 1995 engine could hurtle. 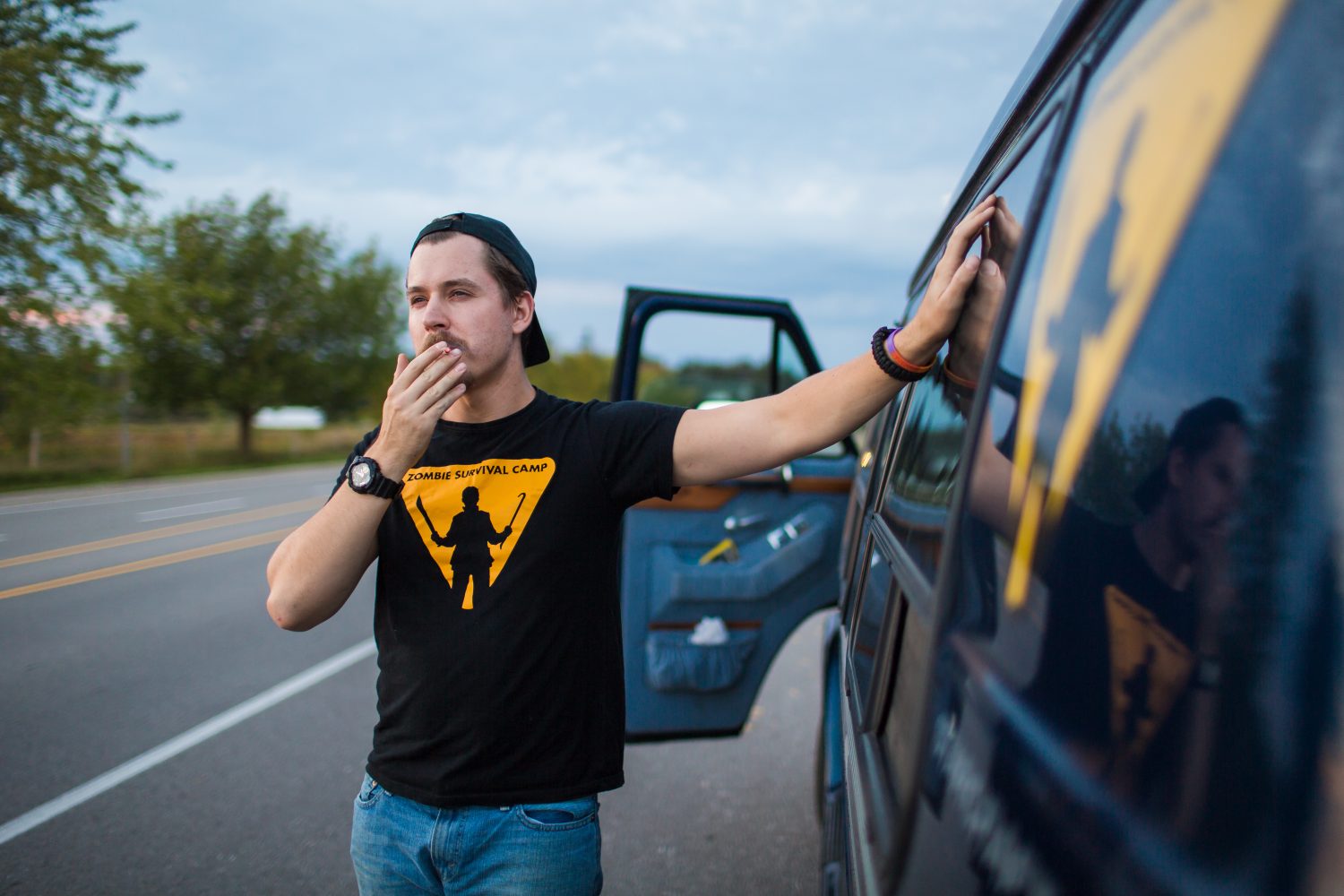 As I sipped a warm Mill. St, I asked him if he ever thinks about the future—a question that I, like many undergrads, have come to dread.

“I think about how cold it’s going to get pretty soon in the van. This van might not last forever, but I’ll always have it as a big closet if anything. Also, I think about the land we have for the camp up North—our mission is to build it up and make it inhabitable.”

At the zombie camp, there is a large house used to service those who come to the camp that Stadnyk could stay at whenever he desires. But just like he doesn’t pay rent to live in his van, Standyk explained that nobody should have to pay rent to live on his land. He believes his place should be open to anyone.

For now, finding pure happiness in being able to take his Vandura wherever he wants, Stadnyk has found satisfaction in the present. This is something students are often taught to disengage.

With constant concerns of what comes next, how much money we’ll make, how successful our business will be, or where we’ll close our eyes to go to sleep, the only way to discover what makes us happy is to not be afraid to step out of the boundaries forced upon us—to live an unconventional life.

This requires different routes for all of us, because some vehicles can only travel so far. But to know what we really want, we need to be willing to explore.

And maybe buy a couple beers to hear a good story.

Photos by Will Huang