Club Abstract officially closed on May 1 after being heavily involved in the Kitchener-Waterloo nightlife for 24 years.

Club Abstract officially closed on May 1 after being heavily involved in the Kitchener-Waterloo nightlife for 24 years. The space has been taken over by Kitchener-based The Event Firm, an event-planning company. The actual facility is now called District and will continue to run as a club with its grand opening on May 24.

Mike Ibrahim, owner of Club Abstract, decided it was time to retire. The decision led to a “great outpouring” from the community. Club Abstract is proclaimed as an alternative club; a familial bond formed within its two-decade reign. 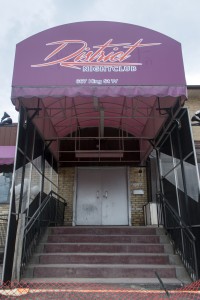 To many, it was a place that garnered many connections and relationships. According to Ibrahim, many goers explained life-changing events happened at the club, and the environment was inclusive for all.

“I don’t really see another club sort of filling that void … I think it meant a lot to the community because we’ve had a lot of people coming up to us saying that you know, if it weren’t for the club I would’ve never met my wife or my husband, or I felt a bit of an outcast until I came here and it became this family environment, it was a really close-knit group of people,” said Ibrahim.

The new club District plans to cater to its predecessor’s goers by retaining Abstract’s Retro Friday. However, the club will be different in that it will only operate as a club on Friday and Saturday nights. The rest of the week, will be dedicated to booking other types of events. It will also continue to cater to a more mature crowd, preferably ages 25 and up.

Since Club Abstract was one of the first clubs in the K-W area to promote absolute inclusivity, Ibrahim hopes other clubs have adopted the same principle.

“I think people just want people to come in and get along, right? I don’t see anybody else catering to the crowd that we cater to, but nowadays people have gone to places more marketable, which is more of the hip hop, EDM … that sort of stuff,” he expalined.

Christina Place, fourth-year economics student at Wilfrid Laurier University, has gone to the club and agrees with the inclusive atmosphere. She adds Club Abstract was a good club for its demographic, and its environment allowed for years of loyalty from its customers.

“I went with some older coworkers and it was different [compared to the clubs near the university]. I remember everyone being really social when I was there … The patio was pretty good, you can go outside and everyone was chatty … even a couple of people came up and talked to us, so I think it’s a good inclusive atmosphere,” said Place.

As for next steps, Ibrahim plans to enjoy his time off.

“My next step is to take it one day at a time,” said Ibrahim.