Trudeau not the answer for Liberals 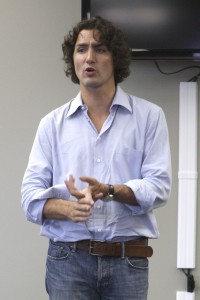 It’s hard for me to find politicians I like. As a very opinionated person, it’s even harder to find one who I’d consider voting for. Small-c conservatism seems stuck in Canada, and that’s a shame considering it’s where my values align. But all hope isn’t lost.

Looking at Canada as a whole, it seems like the country is finally heading in that direction. With the Wildrose Party in Alberta, the Saskatchewan Premier Brad Wall turning things around, Manitoba going blue, and the Ontario Liberal government failing (a decline that has lasted over a decade), Canadians seem ready for a Conservative revolution of sorts. And with Stephen Harper leading the charge, this change looks promising.

But the truth is, I don’t like every Conservative that comes along. I don’t like most Liberal or NDP politicians. But there is only one politician that I can say truly scares me. The revival of the Liberal party after 2011 has happened purely because of Justin Trudeau. He’s the only politician I’m worried about.

For one, he simply isn’t smart enough to run the country. I’m sorry, but I’ve seen him interviewed for years. He’s a clueless candidate. He’s the Sarah Palin of Canadian politics.

When asked a question, his reliance on talking points is embarrassing. An original thought was hard to find from him prior to his leadership victory, but now that he’s heading the party that stuff doesn’t fly anymore.

Seemingly every time he speaks it’s empty words, and when he does make off-the-cuff comments, that’s when the insanity starts.

One of the best instances of how scripted he is involves an interview on CBC’s Power & Politics. The segment was about Canada Post stopping door-to-door delivery, and what Trudeau would do if elected. The host Evan Solomon asked him four times, and all Trudeau said was, “We need to have a discussion.” What does that even mean? His solution is let’s talk about it, as if people haven’t been discussing Canada Post operations for decades.

And let’s not forget the numerous gaffes he’s made so far. First he made the gaffe about the Boston bombings, then about having admiration for China’s dictatorship, then he joked that Russia was invading Ukraine because they lost in hockey. I’d continue, but there isn’t enough ink in the world to finish the list.

Another clear example of his ignorance is on the subject of legalizing marijuana. Not only did that position go against decades of precedent within the party, his knowledge on the subject is lacklustre. He says “prohibition doesn’t work,” then proceeds to say we would need to prohibit the sale of weed to minors. It’s a total contradiction.

Then we get to his plans about spending. Imagine replacing the man who brought us out of the recession at breakneck pace, with the guy who has zero economic experience. He recently put out a video saying that Canada’s debt is “manageable” (even though he’s roasted Harper for years about spending) and we can overspend again. That couldn’t be a clearer sign of what would come under his leadership.

While Harper, with the help of the ex-finance minister Jim Flaherty, have just tabled a balanced budget, Trudeau wants to lean back into recession level spending to pay for current consumption. That should be a red flag for anyone thinking we would maintain fiscal responsibility under Trudeau’s Liberal party if he should get elected.

So he’s incredibly weak on policy, but then look at the numbers. Justin Trudeau may very well be our next Prime Minister. The reason why he’s doing so well is his appeal to the low-information voter.

If you don’t know much about politics, everything Trudeau says sounds wonderful. He chants vague statements about us needing more community, equality and inclusion, but never provides a plan.

Apart from that, his last name gets those in the media and those of middle-age to reminisce about the good ol’ days when his father was busy fundamentally undermining Canadian values. Time can’t heal that wound.

And the most frustrating part comes from the fact that he denounces Harper for being negative, says “Canadians deserve better,” but in every interview he gives he can’t stop criticizing the government. He’s just as negative as any politician, but fools voters into thinking otherwise.

I’ve been racking my brain for a while about how intelligent Liberals could vote Trudeau, and I finally stumbled upon the answer.

I was speaking to my friend and avid Liberal Party supporter, and he said quite bluntly “Trudeau is the leader primarily to get the party back into power.” My worst fears were realized.

Justin Trudeau isn’t leader material, but the means to an end. The fame from his last name is a tool being used to propel him to power, at the expense of us all.

People on the left demonize Harper for “disrespecting democracy,” but I can’t think of anything more disrespectful to the country then running a weak celebrity candidate, in hopes of trying to win a Liberal government. Just like Trudeau says, Canadians deserve better.