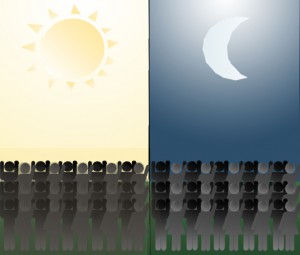 Kelly Miller was woken up at 6 a.m. on Saturday to the sound of a student across the street throwing objects — including an axe — at a tree to try and get a wasp nest down. This is not the first time the Millers have had problems with the students living in their neighbourhood.

Miller explained that she has been living in the neighbourhood between Regina Street and Weber Street around Marshall Street for the past eight years.

Over the years, the student population in the area has been growing.

“We don’t mind so much,” Miller said, referring to the parties that take place.

“It’s when the parties get to — sometimes it’s almost 1,000 people in the backyard.”

They’ve also experienced problems with destruction of property and inappropriate behaviour such as students urinating off roofs. Miller said this is problematic considering there are children living in the area that these students are negatively influencing.

“It shouldn’t be when you live in a neighbourhood and you have to look forward to Christmas, reading week and summer break when they’re gone,” said Miller. “You should be embracing them.”

“Even me as a student, I want to go out my window and yell at them to shut up,” she said. “It’s annoying. If I feel that way I’m sure people who live there forever do too.”

She added that she feels most students are respectful of their neighbours, but the problems occur when they are intoxicated.

“We’re not trying to put them all in a bad light, because we know they’re not all like that,” said Miller.

But lately the partying has been persisting almost every night of the week. At this point, Miller said she isn’t sure what the solution is.
“We don’t want them to not get their education and not be there. But we also want them to respect people that are there all the time.”

The city has a service where neighbours can meet with a mediator to try and resolve their issues. Christopher Mulhern, manager of compliance and standards at the City of Waterloo, emphasized that in order for this to work, both parties have to be willing to undergo the process.

Mediation can help get to the root of the problem, which the city or police aren’t always able to do. Often, this involves simply getting the other side of the story.

According to Doug Thiel, an inspector with the North Division of Waterloo Regional Police Service, in many cases they have students knocking on neighbours’ doors to make them aware of an event they’re hosting and giving them the opportunity to voice their concerns.

“That’s really where we’d like to get to,” said Thiel.

“Where the students feel they’re part of the community and they’re taking ownership and want to make sure they’re fitting in and not causing any issues or concerns.”

Any noise-related issues, Thiel continued, are dealt with by City of Waterloo by-law, although sometimes an officer may accompany the by-law officer to a call.

“We’re looking to be proactive and we’ll have our community resource officer work with the permanent residents and the students to try and mediate whatever the concerns are and make the situation much better moving forward,” said Thiel.

“On occasion that occurs, but it’s certainly not a regular occasion.”

Miller said she wonders if universities have the ability to get involved with students since they are representing their university off-campus.

Drew Piticco, the student conduct administrator at Laurier, explained in an email that the current non-academic student code of conduct indicates that “when it comes to behaviour significant enough to impact community safety and/or institutional reputation, then the university is properly concerned.”

They are working to revise the code of conduct to help clarify when the university can get involved with the behaviour of students on or off-campus.
From his experience, Thiel said the majority of students are respectful.

“At the end of the day they’re kids. From my perspective the students do a good job of acclimatizing, but there’s always going to be issues and concerns and we need to deal with those on a case by case basis.”