With a 5-1 win over the York Lions, the WLU women’s hockey team got the scoring monkey off their backs 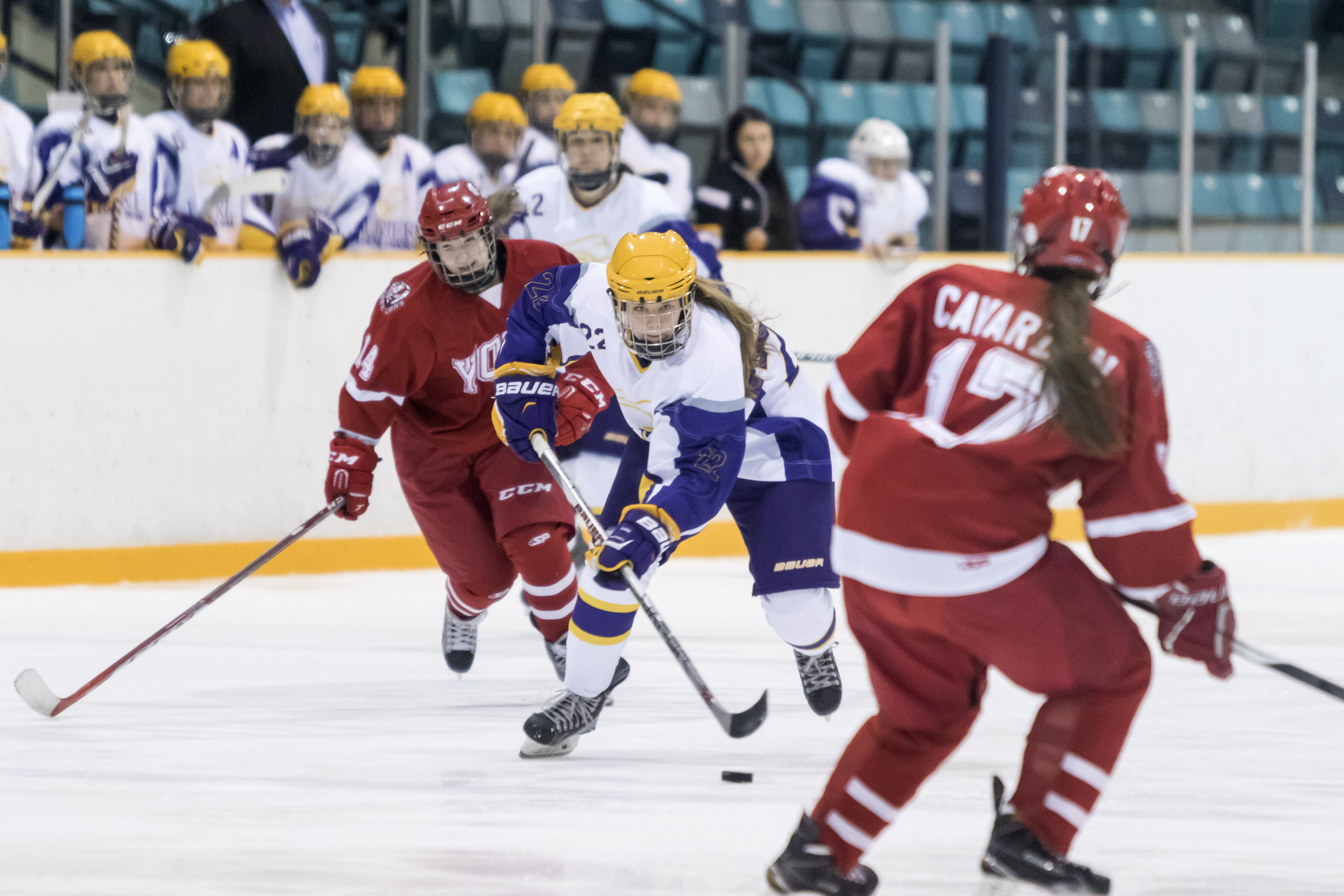 With a 5-1 win over the York Lions, the WLU women’s hockey team got the scoring monkey off their backs | Photo by Will Huang

On the last game before the winter break, the Wilfrid Laurier Golden Hawks women’s hockey team exploded offensively to break their scoring drought.

The Hawks defeated the York Lions 5-1 on Sunday.

This gives the Hawks 19 points going into the break and puts them in seventh place with an overall record of 6-0-4-1.

“Really battled hard right from the beginning, which is something that we really wanted to work on this year,” first-year goaltender Lauren Webber said. “Overall as a team we played really well. It was really nice to get that win tonight especially after the last couple games.”

With the new Ontario University Athletics system in place this year, head coach Rick Osborne knows the importance of getting the three points in regulation.

According to Osborne, it is important to win a series where every point matters.

“[The series] was 2-1 so getting the three [points] in regulation gives us the series. The way the OUA is shaping up you want to win every season series you can against teams because it’s going to be bunched up in this league.”

The Hawks used a number of tactics to get the win, including running many different line combinations and using these changes to impact the pace of the game. Osborne said the first few lines he used were heavy on speed, while the other two lines focused more on hockey IQ.

“That seemed to be a nice formula for not having to shorten the bench and whatever was working,” he said.

“If the speedy players weren’t thinking so well we’d put the thinkers on the ice and we would read [the players].”

The game was even keeled within one goal until Erika Kiviaho put the second tally on the board for the Hawks and momentum swung.

Osborne said the Hawks really needed to step up their game if they were going to solve the York goaltender.

“Their goalie was the OUA player of the week last week and had a couple of big games. We really needed to get her out of her rhythm and I thought that second goal was the catalyst to move us to a win.”

With that in mind, Osborne praised rookie goaltender Webber, who made 26 saves throughout the night.

“We didn’t give her any easy saves from the perimeter. She had to be on alert because there were pucks and bodies all over the net more often than we’ve seen in the last few games of play.”

But much more needs to be done if the Hawks are going to have a strong second half to the season.

Osborne would like to see the Hawks change up their strategy a little bit, even during some “safer” plays.

“I thought our second period sagged a little bit even on some kills, some safe plays,” Osborne said.

“When you got the long change I would like to see us bank pucks off the boards a little. Rather than try to go up the middle that’s just too high risk minimal gain.”

Going into the break, Webber is optimistic the Hawks can carry the momentum through to the second half of the season.

“We can battle hard for all three periods. We can for the whole season. And we finally proved that we can tonight,” she said.