As of Dec. 12, The Wilfrid Laurier University Graduate Students’ Association has terminated its contract with Sandor Dosman, operator of Veritas Café, which is located in the the quad, beside the GSA office.

Veritas Café maintained a contract with the GSA in order to occupy the space and has been open on campus for a little over four years. Veritas Café was predominantly a space for graduate students, however, all students were able to eat or study there.

The closure appeared to happen with little notice. Veritas’ once active Facebook page has been taken down, their Twitter has not been updated since Sunday and there appears to be no information about the café or the closure on the GSA’s website.

Samantha Deeming, president and chief executive officer of the GSA offered the following statement via email on Dec. 14: “On Dec. 12, the WLUGSA [Wilfrid Laurier University Graduate Students’ Association] terminated its third-party contract agreement with the provider who serviced Veritas Café. We invoked clause 3.2.3.3 in our contract, which states that: “conduct on the part of the Service Provider that is materially detrimental to the Business or would injure the reputation of the WLUGSA as determined by the sole discretion of the WLUGSA” shall be grounds for immediate termination. Veritas Café will be closed while we consider how best to move forward. We understand the community could be impacted by this closure. However, the WLUGSA remains committed to providing services that align with Laurier community values and we will continue to work to do so in a proactive manner.”

Following this statement, members of the Laurier community and Kitchener-Waterloo residents took to social media to offer speculations as to why Dosman was put out of work. According to CTV, The Record and Dosman’s own posts on Facebook, it was due to a employment ad he posted online.

The beginning of the ad read: “I need a new slave (full time staff member) to boss (mentor) around at Veritas Café! We are an independent café (yah me) located on campus at Wilfrid Laurier University (parking sucks).”

Dosman made the ad in late November, but claims that he wasn’t notified that the GSA found it problematic until Monday.

“I’ve run ads in the past with very little feedback on, so I thought I’d try something a little different, something a little fun. And it worked. The ad was very successful. I managed to hire four people through the last couple of weeks, there. Some of them hadn’t even started yet,” he said.

Dosman initially didn’t think anything of it. Then, on Monday he claimed he was asked if he had a minute by the chair of the WLUGSA board and was brought into Graduate Students’ office.

“There were a couple campus security there — still didn’t think anything of it. I sat down, [the chair of the board] goes, “Do you know why you’re here?” I’m like, “Nope.” He turned over the ad, [and I] still wasn’t cluing in that there was anything wrong, because I don’t feel like it was such a horrible thing that I would be called into the office, let alone terminated,” Dosman claimed.

“He goes, “Because of this ad, we are terminating your contract, effective immediately. These special constables will escort you back to the café, to retrieve your cash and debit machines and then escort you to your vehicle.””

Dosman retrieved his things from the café and was allowed to come back the next day to get other perishables and belongings.

Veritas Café wasn’t Dosman’s only experience managing in the food service industry. He was once the assistant manager of Wilf’s on campus, as well as the Terrace manager. He opened Harvey’s and Union Market in the Terrace. He then left Laurier to start a café in St. Jacobs in 2011. During that time, he catered for the GSA and was then asked to operate a café on campus. He opened Veritas Café in May 2012.

“It’s been a 100 per cent positive, excellent experience [operating Veritas Café.] I do want to stress that. I’ve worked really well with all aspects of the university. It’s been a great working relationship … I consider those people my friends, in the GSA office. They’re my customers. I see them every day,” he said.

Dosman claimed that in the four and a half years he has operated the café, he has had no correctional meetings or problems with the GSA.

“It’s been a great working relationship. I’ve had one contract extension, there. We did the first contract, so that’s technically my third contract. I was told that they were working on the new one, because this one was ending come spring or summer, so you know, I’ve been in kind of limbo the last little bit.”

Since the issue has gained so much attention on social media, Dosman has concerns for his reputation.

“I’ve got to move on. I have to seek a living for myself somehow. My name is going to be attached to this forever, now,” he said.

In terms of the ad itself, Dosman claims that his intentions were innocent. He was trying to attract potential employees.

“It must have ruffled some feathers somewhere and it wasn’t intentional. It was supposed to be a fun ad. I apologize for that, if it did ruffle feathers. It wasn’t my attention,” Dosman said.

“This world always seems to be about second chances. Everyone gets second chances for everything. And this was just immediately done. There was no ifs, ands, or buts. It just happened.”

In reference to Deeming’s initial statement, Dosman claimed that this issue had to do with maintaining the GSA’s reputation.

“They didn’t want anything to reflect badly on them. And, I hate to say it, but I think they did it to themselves with this, because they are looking back, just by seeing the support that this has garnered. I haven’t called for this support, either. It’s just social media and people stepping up.”

Since his contract was already up for renewal, Dosman wished that the GSA would have discussed concerns or conditions upon his renewal, opposed to just terminating the contract abruptly. He also claimed that he was not asked to take down the ad before his contract was terminated.

“I don’t know if it was brought to university administration’s attention, first, and then they brought it to the GSA and told them to act. Those are questions I don’t have [answers] to.”

According to CTV news, there was a tweet by an anonymous person, using the handle @_coffeeWITCH that read: “@Laurier when you’re a university which promotes education and equality and your on campus café uses the word “slave” in a job ad…” The tweet also had a screenshot of the ad, attached.

Laurier responded to @_coffeeWITCH, on Dec. 9, saying: “Thank you for bringing this to our attention. We are looking into it” and then again on Tuesday, saying: “The matter has been addressed and Veritas Café is closed until further notice. Details will be made public once finalized.” 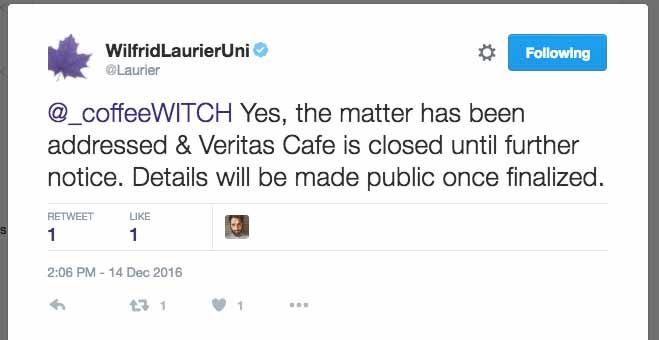 On Dec. 16, Kevin Crowley, Laurier’s director of communications and public affairs released this statement to The Cord via email: “The Graduate Student Association (GSA) approached the university to share concerns expressed to it about the job ad and the decision that the GSA had reached. Given the importance that Laurier places on being an inclusive, welcoming and respectful community, the university supported the direction that the GSA chose to take. The university appreciates the challenges of dealing with confidential personnel and contract matters and we support the GSA in its efforts to re-open the café and rehire the affected employees.”

In terms of the future of Veritas Café, both Crowley and Deeming are implying that the café will be open in January, just under different management.

“I’m sure the café will be reopened. It will be called Veritas Café — I’m guessing,” Dosman speculated.

“There’s a space there. There’s infrastructure there. [The employees] will probably be hired back, by someone new, or it will be an existing, university [partner] like [The Students’ Union] or Aramark, until they find a new operator, I’m guessing. That’s more for the GSA to comment on. My staff [was] going to be done for break as of next week, anyways.”

While The Cord has been unable to speak with any Veritas Café staff members, Dosman expressed concern and appreciation for his employees.

“The staff were shocked. A couple of them reached out to me. Most of them are students. Most of them live right around there. They’ll hopefully be able to get back into the new Veritas Café and find employment and be successful there.”

As for Dosman, he is now trying to look into the future and plan his next steps. He owns a food truck, but does not operate it during the winter months.

“I’m just keeping it day-by-day. Right now, I’m just trying to keep my heart rate low and it’s just been a pretty crazy time. I don’t know what the next step is,” he said.

“I wish my staff the best, and the students. I want to thank people for the outcry and the concern … I’m sure the GSA will do the café right and reopen it. It will just be without me.”

On Dec. 16, the GSA issued the following statement to The Cord: “We will not be making any further public comment about the termination of our service contract. We can confirm that the employees who wanted to, have continued to work all of this week and have been offered to work hours next week. We can also confirm that we are working diligently on a plan to re-open the cafe in January.”

Following the Dec. 16 statement, the GSA released another statement on Dec. 19 on their website that explained that student leaders within the GSA have been receiving threats since Dosman’s contract has been terminated.

That statement said: “On Monday December 12th at 3:30 p.m. we terminated our service provision contract for Veritas Cafe. To this point we have resisted making any formal comments at the advice of counsel. However, given the direct personal threats towards our student leaders, we feel the need for a statement. Rest assured that in any employment or service provision contract, we would not sever the relationship without there having been clear opportunities for training, education, and personal growth throughout the duration of the contract. We cannot discuss contractual and behavioural matters or refute accusations being made in the manner in which we would like. We honour the confidentiality of all members of our community who have been affected over the course of our service provision contract. The Veritas Café staff continued to work their allocated hours last week and this week. We remain diligent in our efforts to re- open the café.”

*This article was originally published on Dec. 14, was updated two different times on Dec. 16 and again on Dec. 19.

Stay-at-home order in place for Ontario