Two views on the euthanasia ruling 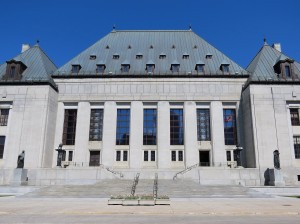 On Feb. 6, 2015, as a result of the Carter vs. Canada case, the Supreme Court of Canada lifted the prohibition on physician-assisted death.

The decision came after much deliberation and examination; the judge maintained that the ban on assisted death is a blatant violation of section seven of the Charter of Rights and Freedoms. “Everyone has the right to life, liberty and security of the person and the right not to be deprived thereof except in accordance with the principles of fundamental justice.”

Tossing the fundamental justice bit into the text allows the Canadian government to erode our civil liberties when necessary with constitutional convenience.

Additionally, the prohibition violates Section 15 of the Charter, which reinforces that equality is to be issued to each person without discrimination and proportionality of the law must be relative.

Before I indulge in this topic, know that I accept the trial judge and all persons affiliated with accepting the appeal are knowledgeable individuals who have researched extensively and who rightfully preside over the general populous; these people represent Canadians and their decisions are reflective of our best interests.

I imagine the decision to lift the ban on physician-assisted death is rejected as a result of a thorough misunderstanding, and those who have taken time to read over the SCC case in full are likely to accept the amendment. For this reason, I will debunk a few misconceptions.

First of all, seeking a physician to help expedite the process of dying does not imply that Canadian doctors are murderers; they will not skip freely through hospitals pulling plugs and ending lives in lieu of treating their patients. The misconception that doctors are now “playing God” based on a mere judgement call is ridiculous.

In fact, if this ban is maintained and new laws surrounding physician-assisted death are created, it is very likely that healthcare professionals will be subject to incredibly detailed and restrictive regulations. The trial judge discredited this apprehension during the court hearing. “A properly administered regulatory regime is capable of protecting the vulnerable from abuse or error.”

Second, perhaps there is some confusion surrounding whom this anti-prohibition sentiment applies to. The stipulations for being considered, though detailed, will be measured on a case-by-case basis and will differ per individual.

While Canada prides itself on maintaining the sanctity of life and ensuring vulnerable individuals are safe, the distinction between a small ailment and what the court referred to as “grievous and irremediable medical conditions” is unmistakable.

Only competent adults (18 years old or older) who are in a position to give a distinctly clear and consensual acknowledgment to the termination of life will be considered for help from a physician — given this person has the aforementioned irremediable medical condition. The condition can be classified as an illness, disease or a disability but only individuals retain the right to make a choice for themself in a coherent state of mind.

This means that siblings or spouses cannot sign off on their deteriorating family members; it does, however, protect one’s family from being aggressively prosecuted by the Canadian Criminal Code which, until recently, condemned people from aiding a “suicide.”

Finally, any person who believes the lift of the prohibition is unconstitutional is simply incorrect. To offer the choice of a painless loss of life is not depriving our fellow Canadians but protecting their fundamental freedoms.

Perhaps the most significant contribution, apart from this clear violation of our basic fundamental rights, is that denying physician-assisted death does not safeguard the general population from pre-emptive suicide as a response to a medical condition.

Moreover, “a number of the witnesses [during the trial] made clear that they — or their loved ones — had considered or in fact committed suicide earlier than they would have chosen to die if physician-assisted death had been available to them.”

If having fundamental rights in Canada renders me to a bed unable to bathe and feed myself or to communicate with my family who suffer having to watch a decrepit version of myself just survive, then I will, like many Canadians before me, end my life with the pull of a trigger or by ingesting copious amounts of toxic medication.

I don’t want to just survive, I want to live. That choice has been cemented in our constitution and it is about time our civil liberties are upheld.

Ask yourself, why do our courts and the Charter exist? They’re supposed to be here to ensure that our democratic rule and popular opinion doesn’t end up trampling inalienable human rights.

But as seen over and over again since the Charter has been introduced, judges have frequently made rulings to appease the majority opinion.

Even worse, the courts have made rulings supporting values that the people who formed the Charter specifically rejected.

The reason for this betrayal of past values is how the Charter has now been described as a “living tree” that changes with the times. So our Charter, the only failsafe against the tyranny of the majority, is to be interpreted by that same majority. That’s a scary reality.

A clear example of this is the new ruling on euthanasia. In the 1990s, the Supreme Court of Canada ruled against it, however, early this year the courts unanimously ruled in favor of allowing this practice.

It’s true that the majority of Canadians support some form of euthanasia, but that’s only under the conditions that a patient is a rational adult, in pain and suffering from a terminal illness. However, this ruling states that terminal illness is not the only factor in the euthanasia process.

When the average Canadian says they support euthanasia, it’s because they picture a dying patient suffering intolerably. But what people don’t understand is that we have the medical ability to reduce and eliminate pain.

The problem is that we don’t provide enough palliative and end-of-life care to patients and in countries where euthanasia is legalized, palliative care decreases.

Furthermore, there are those who pretend this all comes down to one person’s individual rights, but they forget we live in a socialized health care system. This means that public funding is going towards providing euthanasia. People like me who don’t support the practice have to pay for it, so no one’s opinion should be ignored.

Ideally, the system is supposed to work in such a way that parliament can reopen the Charter and make the necessary changes to allow for a new ruling. But that system has been hijacked by activist judges who no longer care about the intent behind the words of the Charter and instead make decisions based on their own personal views.

It doesn’t matter what your views on euthanasia are; what matters is that we are a parliamentary democracy, where the people and the party in power get to make laws.

It’s hard for the left-wing in Canada to get outraged considering most of the rulings are in their favour, but consider the fact that nine judges are now the most powerful people in Canada.

Canadians should be worried most about the newfound power of the Supreme Court. They’ve ignored their own precedent and struck down our laws.

They said Canada has become a different place since Sue Rodriguez, but since then, modern medicine has made natural death more painless than ever. So yes, times have changed, but inalienable human rights aren’t meant to change with them.