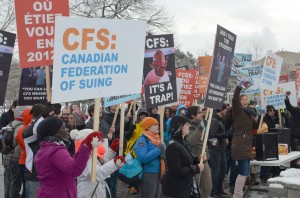 The organization is best known for its campaign to lower tuition fees. CFS members meet in person twice a year in Gatineau, Que. to decide on policy changes and future campaigns.

Busing from Montreal’s McGill and Concordia Universities and Dawson College in the morning, students were demonstrating against hardships they faced leaving the CFS.

“We are very unsatisfied with the way that they operate,” said Melissa Kate Wheeler, president of the Concordia Student Union (CSU) and one of the leaders of the protest.

“We followed their own process to defederate and they don’t have a choice but to listen because we have a right to choose who to associate with.”

The protest follows a September announcement from students on at least 15 post-secondary campuses across Canada, which stated they plan to start a petition to exit the federation.

To leave the CFS, members of that student union must collect a petition with signatures and present it to the CFS executive. Once the signatures are ratified, a date is set for the referendum to take place.

Jonathan Mooney, secretary-general of McGill’s Post Graduate Students’ Society, said McGill students mailed their petition to the CFS earlier this year. “The McGill students’ petition was so large it had to be sent in two envelopes to be sent registered mail,” said Mooney.

He explained it was not picked up from the postal office after a delivery attempt was made and a notice of delivery was left with the CFS.

“A McGill student had a demand letter hand delivered by bailiff to the CFS, demanding they pick up the petition before it would be returned to sender or legal action would be taken,” said Mooney.

Mooney said Jessica McCormick, CFS chairperson, then picked up and signed for the envelopes, but one of the two was returned to sender anyway. Mooney said following the return of the package, the remnants of McGill’s petition and another demand letter regarding legal action and damages was served to McCormick during the AGM’s opening plenary.

Laurentian University Graduate Students’ Association’s (LUGSA) petition suffered a similar fate. It was mailed to the CFS office in Ottawa but was not received or picked up from the post office.

Brendan Lehman, a member of the LUGSA, also had his university’s petition delivered by bailiff to McCormick during the AGM. Lehman said he is glad the protest took place but does not think the CFS will “get the message.”

Brad Evoy, a delegate from the University of Toronto, and a handful of other attendees walked outside of the hotel where the AGM was held to join the protesters. He says after they left CFS staff locked the doors.

“Our members had serious concerns with the process to disaffiliate,” said Jessica Gallinger, one of the delegates from the University of Toronto who joined the protest. “I’m here to express solidarity with the student unions who are currently in litigation.

We believe the CFS needs to be held accountable for its failure to protect the students’ rights.”

Although the CFS staff did not respond to multiple requests for an interview, many delegates were unhappy with the protest.

During unsolicited phone calls, some delegates voiced their concerns to CUP.

Yasmeen Enadi, from University of Toronto Students’ Union, said she was in a seminar on challenging rape culture when the demonstration began.

She said she found the timing of the protest disrespected the CFS as a democratic organization and protesters should have voiced their concerns through other channels.