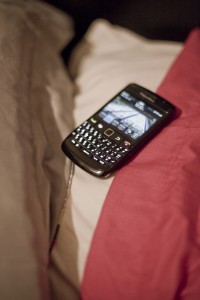 Scientific studies are finding that sleeping with, or near, a cellphone can have serious adverse effects on health.

A 2010 study conducted by Pew Research Centre found that 90 per cent of Americans aged 18 to 29 sleep with, or near, their phone.

Those who text are also 42 per cent more likely to sleep with their phone.

The main concern for researchers is the constant flurry of incoming texts and messages, causing young adults to constantly check their phones throughout the night.
Professionals believe that a constant surveillance of the cellphone causes sleep disruption, causing daytime fatigue, as well as negative effects on memory and attention.

One researcher noted that distracting devices, such as cell phones, could actually affect daytime performativity and alertness.

“We have jet lag in a different form now in modern life called social jet lag,” said Richard Horner, professor of medicine and physiology at the University of Toronto.

“Because we are exposing ourselves to activities and light at later times, then trying to reset ourselves in the morning.”

“It’s like we’re in a different time zone,” he added.

Horner is also the director of the research program, Sleep and Biological Rhythms, which looks into all aspects of sleep-related rhythms.

“There is an issue that people talk about called sleep hygiene,” Horner said. “This argues that we should take our sleep health as importantly as we value nutrition and physical activity for general health and well-being.”

Another recent study done by Washington and Lee University found higher levels of interpersonal stress in young adults who text late into the night regularly.

The study also claimed that not only are young adults pushing back the time at which they go to sleep, but the light emitted by the phone’s screen makes it difficult for the body to produce melatonin, the chemical responsible for signaling the body to sleep.

This means sleeping with a cellphone can both push back bedtime and make it difficult to fall asleep once someone is ready to sleep.

Not only are young adults getting less sleep, the sleep they are receiving is also of poorer quality.

“There have been so many studies done that show that sleep affects performative tasks and motor skills,” Horner said. “It’s not just the fact that you’re going to be awake; your brain processes information to you while you are asleep.”

“Pulling an all-nighter is never a good idea … people don’t perform well the next day.”

As more studies are done concerning phone use during the night, results increasingly confirm that cell phones and electronic use before bedtime has serious effects on our health.
“It’s a question of how well we can prioritize,” continued Horner, “And whether the short term benefits actually last a long time.”

– With files from Ashley Denuzzo