Excitement and hardwork ahead for MP 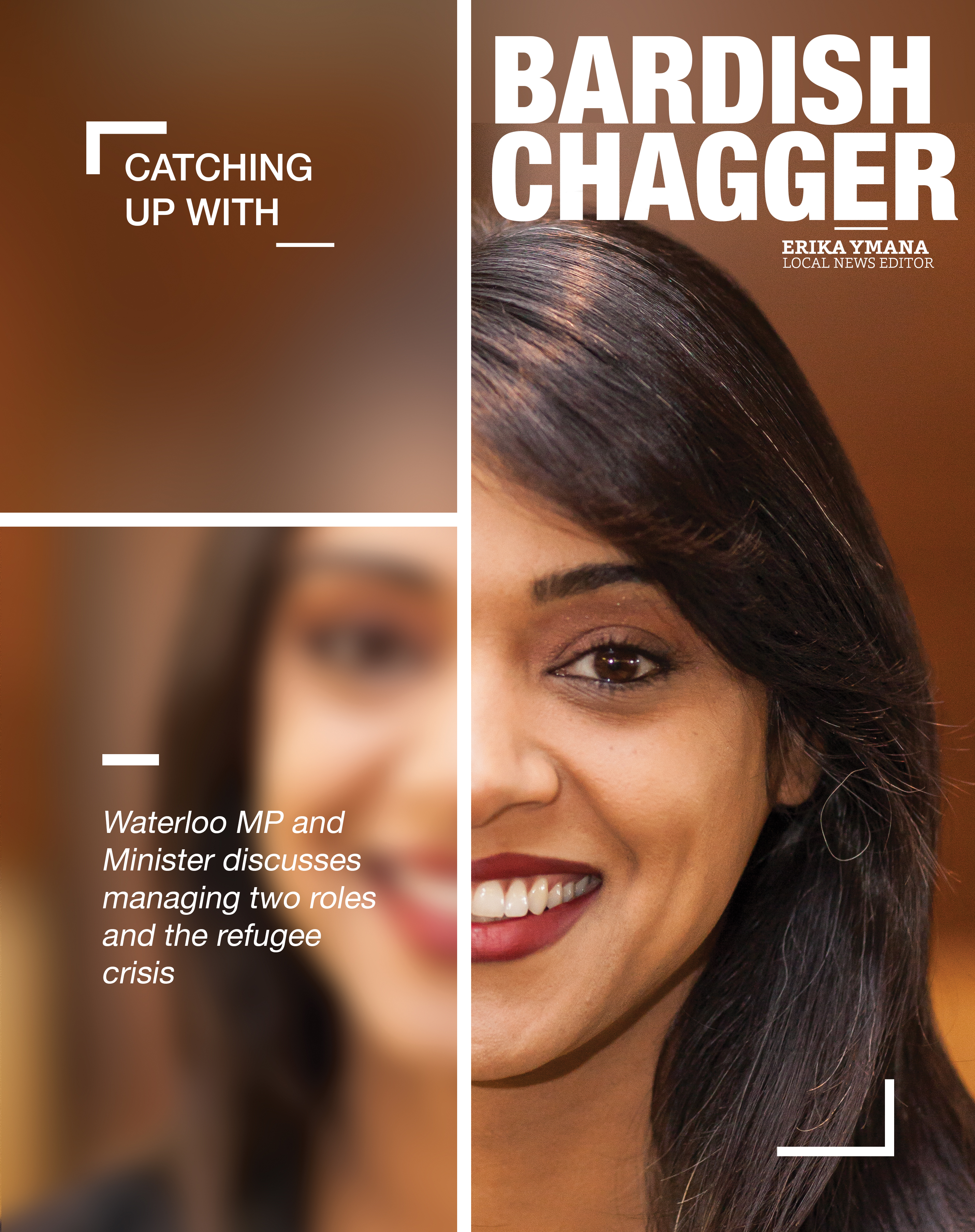 Excitement and hardwork ahead for MP | Photo by Will Huang

It has been just over a month since being elected and despite the constant travel between Ottawa and her respective riding, Waterloo Member of Parliament Bardish Chagger is excited rather than overwhelmed given the additional national responsibility as Minister of Small Business and Tourism.

Life as MP and Minister

What the majority of Canadians don’t know is that the tourism industry is worth $88 billion, according to Chagger. Small and medium businesses employ 90 per cent of the private sector work force and account for about 40 per cent of the GDP.

As minister, Chagger said she is committed to helping these enterprises that seek to be more productive and innovative. She refers to her mandate letter, which is now available online, and said it is a “floor, not a ceiling.”

In terms of her plans for the Waterloo Region, Chagger is still in the process of waiting to sign a lease on an office space that allows her to work closely with her constituents. Other logistics, like setting up her team, are also a work in progress.

“With this added role, there is an added responsibility and that will not change my commitment to this riding,” she said.

Chagger said both roles complement each other, as the community has “a lot to offer.” The community includes start ups, two universities and a college; these resources allow for the expansion and advancement of this region.

The hardest parts about each job

Adapting to both roles have not been easy, as Chagger said there has been a steep learning curve. The main challenge as of now is trying to “take in” as much information as possible. As she is expected to represent and implement change for millions of Canadians, she must bring all important players into the fold.

“I look forward to actually reaching out to Canadians and small businesses and people from the tourism industry that have not had the opportunity to work with the government.”

Having a big part to play in the lives of so many Canadians, Chagger’s accountability outweighs the overwhelming nature of being heavily involved. She said an interest needs to be taken to the portfolio she has received and to recognize the value of the benefits these plans bring to the nation.

She gave the example of job growth: if businesses are encouraged and helped to be more productive, innovative and expert oriented, the accumulation of all factors will result in growth and change.

“I want you to graduate and have a good job within your field … so that when you wake up and you go to work … [it’s so that] you want to go to work. You know? That’s it,” she said.

Refugee crisis: In a local and national scope

Chagger believes the recent reveal by the Liberal Party of Canada of a specific timeline for the resettlement of refugees in Canada was in the best interest of the nation. This came from a successful engagement with Canadians.

“If that means we need to change the way we do things, to deliver success, we will. We’re not just saying this is what we’re going to do and this is how we’ll do it,”Chagger explained on behalf of her Prime Minister Justin Trudeau.

As for local initiatives, she said the Waterloo Region is commendable for its collaboration in planning to provide a well-rounded experience for the refugees who will eventually settle into the Region. Such partners in play are the Immigration Partnership of Waterloo Region, K-W Multicultural Centre, Reception house, YMCA, amongst others.

Chagger said the decision was in recognizing the fact that had it been rushed, it would not have been a good experience for many refugees.

“So I think that is what’s really exciting to me … [that] it’s not about pride, [but] it’s about doing the right thing.”