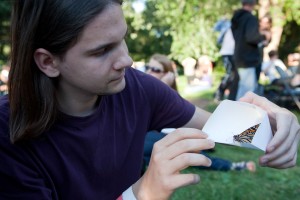 Dozens of butterflies fluttered through the air on Monday evening to represent World Suicide Prevention Day and to signify hope.

The Waterloo Region Suicide Prevention Council (WRSPC) hosted, with the help of volunteers who had all been affected by the topic of suicide, this annual event in Victoria Park on Sept. 10.

“I think it is a chance for people to come together as a community and to know that they’re not alone,” said Linda Bender, who works for the Canadian Mental Health Association (CMHA). She went on to say that its about “[supporting] each other and also to continue to break the silence around suicide and become more open as a society so that people don’t feel alone.”

Numerous citizens of Waterloo region gathered for this two-hour event, which provided guests with a BBQ, an informative booth fair, a butterfly release and keynote speakers. People of all ages were there to show their support and to help raise awareness about this issue.

“I heard that they were releasing butterflies and I have a family friend that [died by] suicide,” explained Nadine Howell, an early childhood educator.

“We know some people in the last two or three years that have taken their own life so we are just coming here for support and donating some money,” added Patty McAlpine, a personal support worker.

Both Howell and McAlpine were among several supporters who had lost loved ones to suicide.

Maria Macrae, whose son, Alex, died by suicide in 2001 at the age of 25, was also at the event because she believes that she represents the voice that Alex never had.

“The pain of a mother who loses a child is the greatest pain,” Macrae expressed, holding back tears.  “And out of that pain came so much determination and as I was looking at my Alex in the coffin, I promised him that I was going to be his voice.”

Tana Nash, the executive director of WRSPC, elaborated on the idea that the community needs to be vigilant in advocating that suicide is a real illness and can be prevented.

“My role for the council is to make noise in the Waterloo Region and say ‘what are we doing about this issue?’” Nash explained.

One of the things that have been implemented by WRSPC in recent years is “Skills for Safer Living”, which as Allan Strong, the team leader for this program, explained, is “the intervention for folks who have made repeated attempts.”

Nash further detailed that, while initial suicide prevention awareness is great, the next step is filling the gaps surrounding suicide, such as dealing with people who have attempted or collaborating with hospitals. “We are trying to go through and identify gaps,” she said.

An underlying theme throughout the event was the belief that suicide should not remain quiet. MP Harold Albrecht from Kitchener-Conestoga, one of the guest speakers, addressed Bill C300, which plans to introduce federal framework for suicide prevention. In his speech, he stated that this bill is “one little piece of a big puzzle.”

Both Nash and Strong have been touched by suicide and are strong believers in suicide prevention. “[It is about] channeling that grief into something positive,” said Nash.

Strong added that, while it is about “awareness and understanding,” it is also about “hope.”

And that is what the butterflies have come to represent to the WRSPC: a symbol of transformation and change.