BBM extends to all platforms 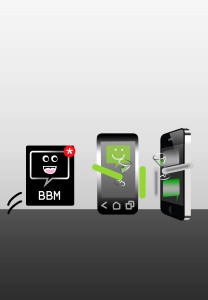 BlackBerry Messenger (BBM) appears to have made a comeback, as the mobile messaging system became available to iPhone and Android users last Monday.

The app had 6 million pre-registrations go through and saw over ten million downloads in its first 24 hours.

“It was pretty thrilling to see those numbers,” said Victoria Berry, the communications director for BBM at Blackberry. “It really paid credit to the hard work that happened here.”

Berry explained that BlackBerry noticed BBM downloads were increasing and they looked at an engagement number usage – seeing just how many people were passing data across the systems.

They tracked an estimated 20 million active users in the first week of BBM’s new platform.

BlackBerry first announced at a BlackBerry Live event in May of 2013 that BBM would be available to other smartphone users in the fall.

“There were definitely discussions leading up to this,” explained Berry.

However, there were some challenges in the development process.

According to Berry, the launch of BBM was slightly delayed because there was an update with iPhone, specifically, the iOs 7 update. The update moved a “font” support that Blackberry was using, so the issue needed to be addressed.

“We were able to fix that really quickly,” Berry said. “I think, in general, great software takes time.”

But the real question about the latest launch of BBM “for all,” was the decision behind the move. For years, BBM was exclusive for BlackBerry users and was the main incentive to purchase the phone.

“BBM was the grandfather of mobile messaging, if you will,” Berry explained. “We’ve noticed that people are building social networks more and more and communicating by different forms of networks.”

“The intimacy of your personal contacts was changing and we knew we had the chance to take BBM to the masses and have it go across the globe regardless of platform.”
In a sense, BlackBerry wanted their mobile messaging system to stay relevant in a world where there was a mixture of different smartphone users.

“I think one thing with BBM is that it’s a product that has been around for a while for our BlackBerry users,” Berry added. “So I think it’s a great mix of people who had it previously and who are coming back.”

“But now there’s new users who are just discovering BBM.”

So far, reception for the BBM app has been relatively positive.

Katie Fernandes, a student at Wilfrid Laurier University, is generally pleased with the download.

“I like it,” she said. “It seems like everyone has BBM now and that’s key, there may be a few flaws but I think they will iron themselves out over time.”
Another student, Kayla Chafe, does not see much of a point behind the new app.

“It seems pointless for= iPhone users,” she said. “I prefer iMessage, but for people who even have Androids I still prefer to message them.”

Berry, however, explained that BBM is distinguished from other messaging systems such as WhatsApp or iMessage, which is where a lot of the criticism is coming from.
She explains that the Pin infrastructure is unique to Blackberry and gives users an “option” in terms of whom they connect with.

“You can chose to share your phone number or email to connect with people or you can share your pin so there is a style of control,” she said.