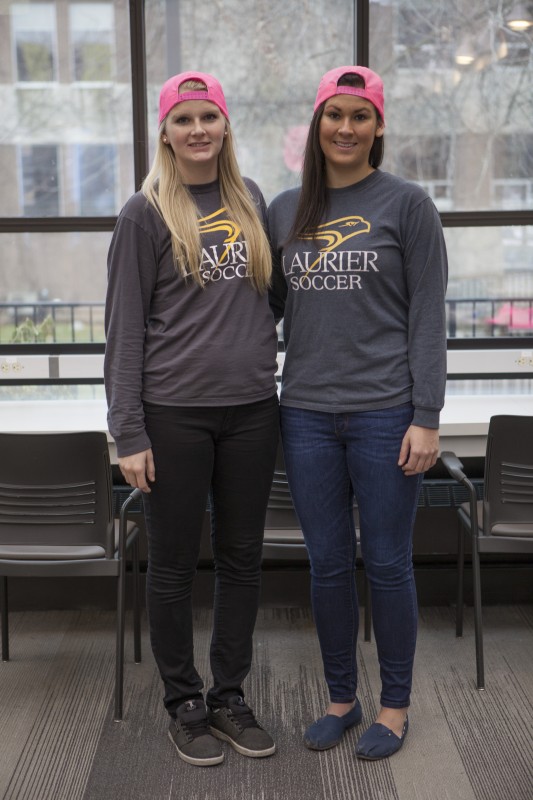 Two Wilfrid Laurier University athletes are advocating for their peers to get real.

Maggie Carmichael, a fourth-year women’s soccer goalkeeper and Stacey Simmons, a second-year dual athlete in women’s soccer and hockey, have brought the Get REAL movement to Laurier. The program supports the unlearning of homophobia, bullying and the “importance of embracing everyone.”

Started in 2011 at Western University, Get REAL has the aim of running workshops in junior high and high schools to change the meaning of being a young person standing up against homophobia.

“We decided to bring it to Laurier because it was really needed in the Kitchener-Waterloo community,” Carmichael explained. “There was really a void in talking about homophobia and educating high school students.”

After figuring out the logistics, Simmons and Carmichael began their movement full force this year. Calling K-W their “home away from home,” it was important to them to make it an inclusive and supporting culture for students.

For Carmichael and Simmons, they have a personal connection with offensive language and homophobic culture.

“We both have experience with it, so that’s why we decided to do it,” Carmichael said.

“Personally, being in the LGBT community and knowing that some people are scared to come out because they are scared about how people are going to act — and me not going through the easiest situation myself — just if people realize that there is support in the community and knowing there is this movement … would be the outlet for some people that need it,” Simmons explained.

They feel as though their unique position as athletes and role models gives them an extra take on advocating for those who feel like they don’t have a voice.

“It gives a different level to it,” Carmichael said.

“It shows people that regardless of what social group you may be in, some you may think are more stereotypical than others, but being athletes we have been able to show that athletes are not necessarily like that.”

According to Carmichael, the men’s teams at Laurier have been very supportive of the Get REAL movement along with the fraternities and sororities.

Members of both the women’s hockey and women’s soccer teams have supported the girls in their efforts to make this a campus-wide movement.

“[It’s] being with teams [that are] more of a family and just having that support and knowing that those 20-plus people are going to support you as well,” Simmons explained.

Get REAL at Laurier had their launch party on Nov. 28 and raised $300 for presentations and community outreach from the movement. They have been actively raising awareness in the Concourse and are currently in the process of making a varsity athlete video raising awareness for unlearning homophobia.

For Carmichael and Simmons, the personal connection to this movement allows them to make a larger change.

“It means a lot because knowing what I’ve gone through, I did not want people to feel the same way so figured if I could do something to help them, I was doing a good thing. And that really makes a difference,” Carmichael said.

“Get REAL is so big across the country, it seems like eras are changing and people are changing,” Simmons concluded.