We are all to blame for Ford scandal 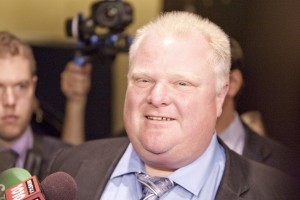 One of the worst parts of a political scandal, besides those hurt by the scandal itself, is the tendency it has to overshadow.

Scandal has the power to divert public and media attention and resources away from important issues of governance and preoccupies the public entirely.

The most recent and close-to-home example of political scandal is, of course, Toronto Mayor Rob Ford and his series of public controversies regarding his personal life.

Scandal has robbed us of any real ability to scrutinize Mayor Ford on anything of substance — legal substance that is — because we are consumed by the headlines focusing on scandal.

Despite Ford’s troubling personal life, the public and the media are as complicit as the mayor in putting personal issues before the city itself.

The media has profited greatly off of Ford’s personal troubles and received more attention and publicity than it would have otherwise. The mass interest in Ford’s drug allegations and the media’s obsession with covering it perpetuated an endless cycle of supply and demand where important issues were sent to the periphery of public consciousness.

The decisions made in city hall that impact the every-day lives of the millions in the GTA and shape the city’s future played second fiddle to a scandalous story that the media could sell and the public would eat up.

Allegations and conflict of interest issues aside, Rob Ford has been an adequate, if uninspiring, mayor. He has done a decent job following through on platform points that got him elected and has retained his “average Joe” appeal.

From a purely political perspective, he has done an average job and the city could have done a lot worse.

However, he has brought international attention to the city for all the wrong reasons and has few friends left on city council.

He can likely no longer be effective, but the problem is that there is no way to remove him from office. Voters brought him in and only they can take him out.

What’s more problematic is that if another election was held today, he may in fact win based on the strength of his core constituents and supporters that spearheaded his Mayoral campaign the first time around.

Perhaps if the public and the media paid more attention to offences that could have taken the Mayor out of office, the city wouldn’t be in such a predicament.

Prior to election, Ford used a racial slur against a fellow councilman and also voted against AIDS funding while explaining, “If you are not doing needles and you are not gay, you wouldn’t get AIDS probably.” He referred to this as simply stating the facts.

But both of those instances were in the past and the media did little to bring them to light prior to Ford’s election. It is disingenuous to act surprised and offended by the way Ford conducts himself now, when he was exactly the same prior to and during election.

Ford also solicited funds for his private charity using city letterhead and participated in a city council vote to drop an investigation into his actions. The act of fund-raising itself and the conflict of interest that followed made the news, but still no genuine or organized movement for Ford’s removal existed.

Ford even proposed the city get rid of watchdog agencies (you know, the people who make sure our government is acting appropriately and ethically) because they were useless and trying to make themselves look busy. Actually, they targeted him and he didn’t like it.

Yesterday afternoon, Ford casually admitted that he did use crack-cocaine, roughly a year ago in a drunken state.

He claims he is not an addict and all he can do is apologize and move on. Ford survived his past indiscretions to get elected and most of his wrongful acts as Mayor were largely ignored. He is a survivor and a manipulator of the system and his success has made him believe in his own political invincibility. You can’t make international headlines after admitting to cocaine use, especially after months of denying the whole thing.

The news isn’t surprising but the timing and delivery of his statement was. It should be interesting to see how his supporters handle the news and whether he can continue to operate in his own world where Mayors get to do whatever they want and remain in power.