The meanest thing I ever did on Valentine’s Day… 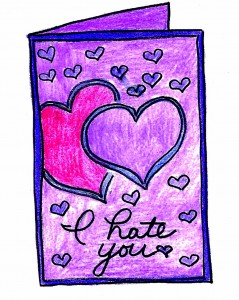 In elementary school, the biggest rule of thumb we were taught, was to treat others the way you would want to be treated. This applied to everything. Despite this lesson, I still faced the sad consequences of being laughed at if I wore overalls to school or was tricked into trading my delicious recess snack thinking they would give me their favourite one in return. It was always a lesson of “survival of the fittest.” Except, on Valentine’s Day things were always different.

To avoid any exclusion or hard feelings, my teachers made a rule that we all had to give every student in the class a valentine. This thrilled me: 24 personalized Valentine ’s Day cards. It was a day to give and get back in return.

But in Grade 4, something had come over me that made me break that special rule of thumb. I thought revenge would be sweeter than the sentimental words written out on a card. But who could drive a sensitive nine-year-old girl to seek revenge? It was Conner.

Any interaction with Conner ended in humiliation. The majority of name-calling, eye rolling and shameful point-and-laugh was enforced by him. He was a bully; a mean and terrifying person to encounter. No one brought out much anger out of me than him. I couldn’t stand him.

Having my two piles of Valentine’s Day cards out – The Simpsons for the boys and The Power Puff Girls for the girls – I started personalizing and going through the class list, making sure to add hearts on the ones that were for my best friends and smiley faces on guys who I thought were cool.

Then I got to Conner’s name. Seeing his name on the list and having to force myself to give him a card that expressed sentimental emotions stung me. Suddenly the idea of having to be “inclusive” felt like a punishment. Why give someone a card when they purposely treated you so badly? I decided the only way I would feel good about giving him a card was to teach him my own rule of thumb.

The first plan of action was choosing the ugliest card in the pile. It had to be either Nelson or Mr. Burns, the logic being that they are both considered mean characters. No way would Krusty the Clown or Bart Simpson be wasted on Conner.

Carefully following the instructions, the card was personalized and looked like every other one in the pile; except for one tiny little detail. At the top right corner I left a tiny note that looked like a bunch of dots that went unnoticed. Those dots translated into the words “I hate you”.

As the dots made their mark on the page an immediate feeling of regret came over me as blood rushed to my face. What if he saw? What if I got in trouble? Was I considered a mean person for feeding back the treatment I was given?

The Valentine’s Day card exchange was a success. Placing all the cards on each of my peers desk, I carefully looked out of the corner of my eye towards Conner to see what would unfold. When he got to my card, he barely looked at it and tossed it in the pile, I was relieved. It made me feel better that I was at least honest while at the same time, not being recognized.

After Grade 4, Conner moved away and I didn’t have to worry about dealing with any type of bullying from him from then on. It wasn’t until I was 18 years old that I would come face-to-face with him again at a party. To my surprise, he was unexpectedly nice and fun to hang out with. I almost felt guilty enough to admit to him the meanest thing I had done on Valentine’s Day, but really what’s the fun in that?