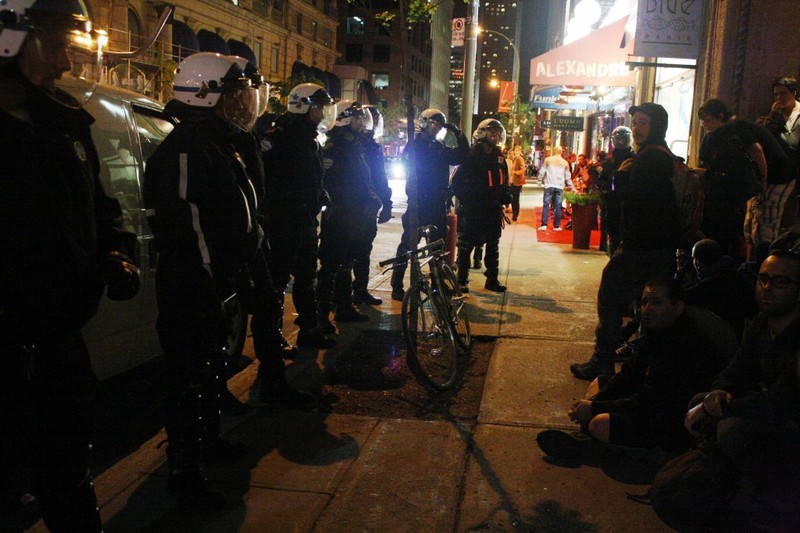 The proposed legislation would suspend the current semester until August, postponing the fall semester until October 2012 for the 14 CEGEPs and 11 universities seriously affected by the student strike.

The bill was met with mixed reactions during question period after being tabled by Charest’s Liberals Thursday morning.

Newly appointed Education Minister Michelle Courchesne defended the government’s decision, claiming that the bill “defends the right to education and accessibility to education.”

Parti Québécois leader Pauline Marois criticized Charest for trying to introduce special legislation instead of meeting with student organizations to negotiate the tension over the tuition increase. Visibly upset, Marois called the bill a “waste” and denounced the government’s decision as “disgraceful.”

“This is an important decision for both students and the future of Quebec,” said Charest in response.

It’s unclear when the legislation will be adopted, but Charest implied it would be in the near future. The bill, announced Wednesday in a press conference, resulted in another night of protests in downtown Montreal by students and supporters unhappy with the idea of postponing the semester.

Although Charest said he hopes the law will bring calm to the situation while pressure is mounting, some students believe it will have the opposite effect. Hugo Girouard, a student at CÉGEP de Saint-Laurent that has been on strike since February, expressed his disdain for the bill.

“I’m hoping the government understands that they are not kings,” Girouard said. “They can’t control us like this.”

Université de Québec à Montréal student Marc-Antoine St-Yves believes the legislation will not solve the tuition crisis. Although St-Yves has finished his semester and didn’t boycott classes, he is worried the law will only worsen the situation.

“What I think will happen is the strike will go on,” he said. “And if the law passes there will be violence for sure.”

“I just hope the student will find a way to negotiate with the government and stop this crisis,” added St-Yves. “The patience of the population has a limit.”

May 16, after Charest’s intention to introduce the bill was made public, over 3,000 protesters took to the streets in three different demonstrations. While two protests remained peaceful, the third resulted in 122 arrests.

The third demonstration was declared illegal at 12:25 a.m. after firecrackers were set off, bank windows smashed, and allegations by the Service de Police de la Ville de Montréal (SPVM) of an assault within the crowd. Plastic bullets were fired at protesters on at least two occasions.

Several “targeted” arrests were made before protesters were surrounded by officers for a mass arrest, which also included two student journalists from The McGill Daily and three from Concordia’s newspaper The Link.

The student journalists tweeted their location to the SPVM’s Twitter account, which responded and informed the students that calls were being made regarding their situation. Four buses arrived on the scene to transport arrested demonstrators at about 2 a.m. Shortly afterwards, the five student journalists were released.