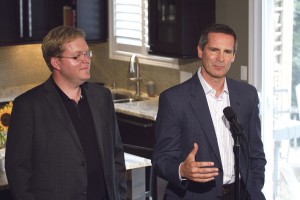 Over the past eight years, the Ontario Liberal government has recognized the importance of education in securing our futures. They have invested in early childhood education, reduced class sizes in primary grades, committed to post-secondary education and recently offered post-secondary students a reduction in tuition costs.

The Liberal commitment to education has been one of the main reasons I have supported the party during its tenure at Queen’s Park.

But, actions taken by Premier McGuinty and Education Minister Laurel Broten towards teachers’ unions in recent days and weeks have been seriously disconcerting. At times, their comments have been heavy-handed and their tactics out of line.

Since the Ontario English Catholic Teachers’ Association (OECTA) reached a deal with provincial negotiators in early July, the McGuinty government has been pressuring public teachers’ unions to accept the same deal. The deal was all downside for teachers: a zero-percent wage hike for the next two years, and fundamental changes to teachers’ sick days.

On Aug. 16, Minister Broten released details of potential “back to work” legislation that could be imposed if school boards don’t reach deals with the unions by Aug. 31. When enacted, it will prevent automatic pay increases — imposing wage freezes on teachers — and will ban teachers from striking for the next two years.

The enactment of this bill and even just the discussion around it is downright troubling. Public teachers’ unions should not have to suffer because OETCA accepted a bad deal. They are right to fight back against the “take it or leave it” approach the government has put in front of them.

The McGuinty government suggests that the cut of annual sick days from 20 to ten and the elimination of banked sick days will save the government $2.7 billion.

As not-for-profit group People for Education points out, this is a fallacious estimate and is misleading about the impact on the province’s fiscal situation. On the books, school boards have to account for the possibility that teachers will use all of their banked sick days. The average teacher, though, will only use nine sick days over the course of the year. So, most of this “debt” will never be something the government has to pay.

Instead, limiting the number of teacher sick days and eliminating banked sick days only hurts the teachers that need them most: teachers that have health crises and need prolonged periods of time off to recover.

The risk of illness is a more prominent occupational hazard than in other professions. Being exposed to children on a daily basis, children who are sent to school when they’re sick, children who bring contagious and dangerous diseases like Fifth Disease to school, is a risk that every teacher takes, and they must be given the opportunity to take time off should they be put into a compromising health situation.

The province’s fiscal crisis is real. Perhaps the discussion of reduced teachers’ wage increases should be on the table.

But what should also be on the table then is the number of extra hours that teachers put into their work that goes uncompensated. The countless hours spent coaching sports teams, grading assignments and writing report cards.

I suspect that if an hourly compensation for these additional activities was considered, the wage freeze discussion would quickly fade from view. Substantive questions aside, let’s move on to the way the government is trying to implement this: a fundamental threat to the right of collective bargaining.

These debates should not be occurring in the media through press conferences and impassioned speeches to union membership. They should be happening around a bargaining table under a fair collective bargaining process.

In 2007, the Supreme Court of Canada ruled that collective bargaining is a right protected by the Canadian Charter of Rights and Freedoms. After a British Columbia government tried to eliminate a collective agreement because of a crisis of health care costs, the Court ruled that “the protection enshrined in the Charter may properly be seen as the culmination of a historical movement towards the recognition of a procedural right to collective bargaining.”

How can we, as progressives, sit here and criticize Stephen Harper’s approach to labour relations — back to work legislation for CP Rail, Air Canada and Canada Post— while doing nothing about McGuinty’s assault on collective bargaining? I was appalled by the Conservatives’ attempts to undermine a constitutional right just as I am appalled by the Liberals’ attempts to do the same thing.

Accusing teachers of avoiding negotiation by “spending the summer at the cottage” inflames tensions with teachers and is insulting to progressives who have supported Liberals for many years.

Teachers do not have the same ability as private sector workers to use the prospect of leaving for another company as leverage in the negotiation process. They deserve the right to have a fruitful debate at the collective bargaining table that respects their basic right.

It’s time to “protect the gains made in education” by protecting the Ontario education system’s single greatest asset: teachers.

This column originally appeared on Joseph McNinch-Pazzano’s, “Global Watch Project”, which can be found at
www.josephpazzano.ca.