In defence of Pope Francis 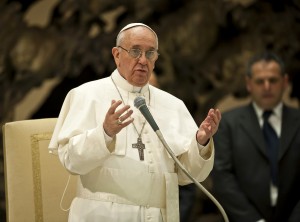 At this point, many people have weighed in on the tragic events that have taken place in Paris over the past few weeks.

That being said, one of the most interesting statements on this situation has come from Pope Francis.

Many people on both the left and right, Catholics and non-Catholics, have reacted with outrage following these statements.

This is a gross misunderstanding of his message.

The Pope is not saying we need to ban free speech; he’s simply saying it’s not right to disrespect other people’s faiths.

These two beliefs are extremely easy to reconcile, however the outrage machine just won’t let it go.

Mehdi Hasan, a well-known Muslim author and columnist, wrote a piece in the Huffington Post last week where he made an excellent point.

I disagree with most of his article, but he said something that everyone needs to keep in mind.

He wrote, “I do not believe that a right to offend automatically translates into a duty to offend.”

We have the right to free speech, but we should also have the moral character to respect one another.

A racist has the right to free speech but that doesn’t mean we should support his racism.

What makes it more frustrating is that if the cast of characters in this scenario were different, people would totally agree with the Pope.

For example, if the nuts from the Westboro Baptist Church were to be beaten up by the family of someone they were protesting, we would all echo exactly what Pope Francis has said.

Another example would be if someone willingly left their front door open while they went on vacation and came home to find someone had stolen their stuff.

Of course we’d want the property retuned to the rightful owner, but I think we’d also recommend that the person lock their door.

It’s not victim blaming. The Pope isn’t saying the satirists deserved violence at all. Rather, he’s saying people, for better or for worse, face societal consequences when offending people.

I wrote a pro-life piece for The Cord last semester and faced some backlash from my peers.

It’s a fact of life that people who get hurt may respond aggressively. It doesn’t mean I support violence.

It’s maddening to see people get on their high horse now, claiming they stood for free speech all along.

If you didn’t defend Ezra Levant in 2006, Tracy Morgan in 2011 or Bill Maher and Sam Harris last year, then you don’t believe in free speech.

If you support censoring people for being offensive, then you don’t believe in free speech — you’re part of the problem.