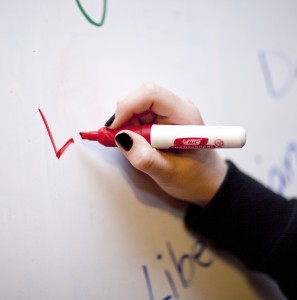 On January 30th, the Laurier Students For Liberty club put up a Free Speech Wall in the Concourse. The purpose of this wall was for any student to come up and write whatever they wish with impunity. Controversial statements such as “God doesn’t exist,” “Abortion is murder,” and “Go Leafs!” filled the board. In the past, these walls have created quite a stir on some university campuses. At Carleton, this wall was taken down by a furious student, and at Queen’s University, the administration ordered it to be removed.

Discussion about these walls have even been seen on the CBC and other media outlets, as they represent a fundamental conflict in our free society. What makes this a tough issue is that while universities thrive off of students expressing themselves, there’s a problem when it enters the domain of hate speech. If someone writes a sprawling racist or homophobic rant, it’s understandable why the university would be outraged.

However, the libertarians behind these walls aren’t blind to this moral dilemma. In fact, they’re well aware of it. They argue that even the most vulgar of statements are still protected by our right to free speech.

I must admit, at first I was skeptical. Most of us today rightfully object to racism on the grounds that it’s disgusting and reprehensible, but here’s this group allowing even the most offensive of language to be expressed. That’s when it hit me, and their arguments became clear. They’re not supporting racism. They’re supporting the right to offend people. No one has the right not to be offended.

I was quickly reminded of two controversial figures that embodied this point exactly. I’m talking about the late atheist icon Christopher Hitchens, and the neo-conservative Ezra Levant. Hitchens made a career out of trashing religion and its followers. I myself have cringed with offense listening to one of his long rants on YouTube. But even when he stated my Christian faith was “totalitarian” and when he called all believers “losers,” I can’t say I wanted him locked up and punished.

The same goes for Ezra Levant, who was prosecuted for 900 days by the Alberta Human Rights Commission, for reprinting those stupid Danish cartoons of the Muslim prophet Muhammad. He didn’t get convicted, but the legal battle cost him $100,000 that was never reimbursed.

Is this Canada? I’m aware we have hate speech laws to try and protect people, but the road to hell is paved with good intentions. The libertarians argue that unless someone physically harms you, your property etc., you shouldn’t be able to prosecute them, and it’s a slippery slope if you try to.

Simply being offended does not give you authority over someone. As a Christian, I’ve heard only the most vile of insults hurled my way from everyday citizens to famous celebrities. I’ve been offended a lot, and sometimes it even ruins my day, but what can I do? Can we lock up Richard Dawkins? How about we jail David Silverman, the President of American Atheists? Or how about we go after Dan Savage and give him 30 years behind bars for insulting my religion?

This course of action is both impractical and short-sighted. If we honestly start unleashing the government on everyone who hurts someone’s feelings, you’re giving unlimited power to the thinnest-skinned person in the room. And that’s really what hate speech laws are. They’re “feelings” laws. If you hurt someone’s feelings, you must be disciplined.

Now of course there are justifiable limits on speech that any civil society needs to have. For example, if someone is advocating violence towards a certain group, then that’s a good reason to arrest him. If someone is making untrue slanderous remarks about another person, then they should be sued. Uttering a death threat is another example of speech that should be illegal. But hate speech alone is none of those things.

I think one of the biggest issues with hate speech laws is that we use them to shut ourselves out from opinions we don’t like, and that’s a problem. Look at it like this: if some racist bigot were to insult one of the many minority groups here at Laurier, would you all of a sudden abandon your values and join in on their racism? No way.

In fact, it would probably further strengthen your opposition to racism because of how laughably ignorant racism actually is. There is no rational defense of racist sentiment, and I don’t think there’s one valid argument in favour of racism. Martin Luther King Jr. gave us the best argument against discrimination, and his influence can be felt every day here in Canada, which is possibly the most inclusive country in the world.

We shouldn’t be scared of hate speech, because it runs so counter to our Canadian values that it holds no weight.

That’s why the Free Speech Wall was a success, because no matter what was written, it only managed to enhance Canada’s reputation as peaceful, loving, tolerant, accepting, and most importantly, free.