Bringing games to the real world 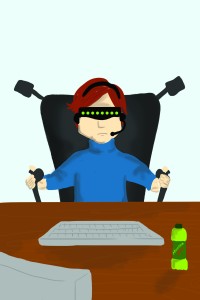 What if life were a video game? A world where the path was clearly marked, ‘leveling up’ resulted in fireworks, respawning was an option and bonuses could be unlocked.

The allure of a video game world isn’t hard to see and three billion hours are spent globally each week enjoying the thrill of meeting goals and unlocking the next level. But video games are coming to the real world and have brought with them a new lifestyle, business model and outlook.

This, regardless of the bad rap games and gamers receive, is a positive thing. This new style is simply called gamification. It is the act of integrating game aspects into traditionally non-game contexts to engage people in problem solving.

The level of commitment ranges. Some people have created entire systems that hold their task list and award, for example, a plus one public speaking bonus after the big presentation. Others are more low key, instead choosing to integrate game aspects into real life without any virtual counterpart.

From casual workplaces filled with fun and foosball tables to executive who lay out assignments as quests, gamification is catching on not only in “innovative” sectors like technology but in more conventional business settings.

Bringing games to the real world takes the skills learned in-game and makes them valuable assets to society that would otherwise be under-utilized. Make no mistake, there is value in games and important lessons learned.

Gamers are motivated to start and finish quests because they believe in their eventual success. Even seemingly unsolvable puzzles are worked at for hours with nothing more than the vague promise of a solution. The world could always use more motivated hope.

Gamers understand teamwork. Many games are based on working in teams, creating a sense of comradery. These skills are the result of committed, hard work being second nature to a gamer.
Finally, and perhaps most critically, gamers believe in the ‘epic meaning’ of life. That is they’re perfectly comfortable being handed an epic quest in which the fate of the world rests on their shoulders and running with it.

What does this culminate in? Gamers believe that they have the ability to save the world. They are willing to defeat Bowser, save Hyrule or perform any quest they can get their hands on. Certainly the planet could use more people willing to save the world. There are potentially 500 million of them sitting around the globe unknowingly waiting for the opportunity to unplug and play the game for real but we haven’t given them a world in which they feel comfortable to do so.

An intrinsic part of video game quests is the atmosphere and parameters of the game world itself. Characters in the game trust the player to accomplish the mission; they believe in the hero’s success. They encourage them along the way and provide rewards upon accomplishment.That’s the key to gamification, creating an environment where everyone, gamers and non-gamers feel safe enough to try.

Where embarking on a quest is a team event and everyone wants to save the princess together. What does it matter if the princess is in another castle if there’s a person for each one?

Our society needs games. We need the fun they bring, the skills they teach and the mentality they create. But we really shouldn’t need them. What we should have is a world that doesn’t drive its people into a virtual universe to feel confident, competent and trusted. Gamification is one step closer to making games comes to life. And one step closer to bringing world change out of the console and into our reality.