LRT not the answer for Waterloo 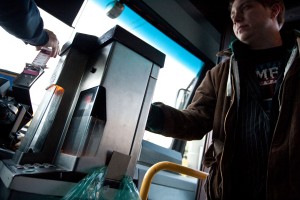 However, the buses are frequently inconvenient and overcrowded. The apparent inadequacy of public transportation in Kitchener-Waterloo has led to ambitious and expensive light rail transit (LRT) project, approved by Regional Council last year.

The plan is to have an LRT line run parallel to King Street for much of the route, stretching from Conestoga Mall in the north to Kitchener’s Fairview Mall in the south. It would also go west to reach the University of Waterloo, bypassing Laurier entirely.

It is true that bus service in Waterloo can be sub-par, but I believe the current solution should lie in improving bus service, rather than creating a LRT line.

I believe LRT is somewhat of a costly overreaction, and that Kitchener-Waterloo does not have the population to support such an endeavour, which may result in a costly and underused LRT line.

It would also go along a route that would make it effectively useless for people travelling from Laurier to Uptown Waterloo, and would also end up dividing Waterloo Park in half, with trains running through the middle. Additionally, the thought of a light rail train bisecting the middle of King Street in uptown Waterloo, with drunken students left and right stumbling across the tracks, barely avoiding the oncoming trains, does seem like a frightening prospect indeed.

Cities with LRT are typically larger cities like Calgary and Edmonton that have a far greater population than Kitchener-Waterloo, with denser downtown cores. The Kitchener-Waterloo region would be the least populated metropolitan region in North America to have an LRT line.

However, the mere fact that LRT has been approved for the Kitchener-Waterloo area proves that there is indeed a problem with the mass transit system that needs to be addressed.

To address the problems with the current bus system in Kitchener-Waterloo, many of the main lines need more frequent schedules, reflecting the heaviness of each line’s use. As it stands, many buses are already overcrowded to the point where some passengers cannot board, as the buses are filled to capacity.

Improving bus service is an adequate solution for an urban area with the population and size of Kitchener-Waterloo, rather than constructing a white elephant LRT line.

There are also other expensive transportation related projects in the region that I believe should take precedence over the light rail line, like the planned freeway realignment of Highway 7 between Kitchener and Guelph.

Building an LRT system may indeed make sense in the future, perhaps 30 to 50 years from now, as the Kitchener-Waterloo region grows larger.

However, for the time being, improving the existing bus service would be a more adequate and realistic solution to this problem.