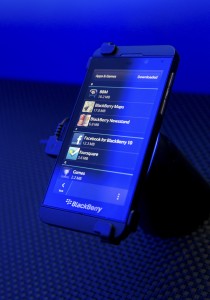 After six quarters of declining sales, BlackBerry, formerly known as Research in Motion (RIM) is showing a promising new platform that the locally based company is hoping will put them back in the global race.

And that is exactly what they did.

Following the release of their new smartphone, the telecommunication company announced that it would be changing its public brand name from ‘RIM’ to ‘BlackBerry’. The name change was made to centralize the company’s priorities and accommodate consumers who were already referring to the business as ‘BlackBerry’.

“I think it’s a brilliant move,” said Karen Scian, a Waterloo city councillor. “It was a smart decision to really identify with who the company is.” Scian, who is a self-proclaimed BlackBerry enthusiast, agreed that the relabeling of the company was a step forward in turning BlackBerry around.

The Z10 smartphone was launched at the end of January and has been generally received well by the public.

“I am thrilled with the advancements that have been made,” Scian said. “I’m excited about what the future is for BlackBerry and Waterloo.”

Headquartered only mere minutes away from the Wilfrid Laurier University campus, BlackBerry has long been supported by the Kitchener-Waterloo community. In fact, many local businesses are having promotions to advocate the newly launched phone. Second Cup is offering ten per cent off for any customers who show their BlackBerry phone. Other local companies are simply offering their congratulations on the successful launch.

“It just shows that this community is behind BlackBerry all the way,” Scian said.

Hoping the Z10 will make BlackBerry a serious competitor again between Google’s Android phone and Apple’s iPhone, BlackBerry has been mainly promoting their entirely new software. Developed by QNX, the device offers a multi-function operating system, which includes a swipe-based interface, an updated browser, stock keyboard and screen sharing.

Avigael Sampson, a second-year communications student at WLU, was one of the first members of the public to get her hands on the new Z10. She had won a Twitter contest hosted by BlackBerry, where she was awarded access to the Toronto launch party and received a free phone before it was available to the public.

“Basically you had to tweet what feature you were looking forward to the most,” Sampson explained. “I sent in four entries and then got a text from BlackBerry and I knew right then.”

The Toronto launch offered an exclusive preview of the phone where attendees could get a first glance at the new Z10.

“There was an entire room with sample BlackBerries,” she explained. “You could go and just check it out, play on it, look at the features and learn new stuff.”

Sampson added that the new software makes a large difference with the phone.

For now, the sales of the Z10 are still a bit rocky. Although the phone has been quite popular in the U.K and some parts of Canada, the stock market is showing fluctuation. On Feb. 11, BlackBerry’s stock dropped five per cent after The Home Depot announced they were switching their executive employees to iPhones.

The future may be ambiguous for the revamped BlackBerry, but hopes are still soaring high in the community.

Optimistic, Scian shared her final thoughts on the BlackBerry initiative.

“I think it’s a great product and they have done amazing things”, she said. “The people at BlackBerry have gone the extra mile … and it’s here to make this company competitive.”